Disney has released a new video that previews the new Grizzly Gulch area at Hong Kong Disneyland, which is due to open to the public in July 2012.

Themed around a Gold Rush-era California town, Grizzly Gulch will be similar in style to Frontierland areas at other Disney theme parks. Its central feature will be the enormous Grizzly Peak, one of Disney's trademark faux mountains. This will play host to the land's headline attraction, the highly-anticipated Big Grizzly Mountain Coaster.

The coaster will see guests boarding a mine train, which will then race around a series of twists and turns on the mountain. The ride will be manufactured by roller coaster specialist Vekoma, with Disney adding in a host of audio-animatronic creatures alongside it to provide something of a storyline. 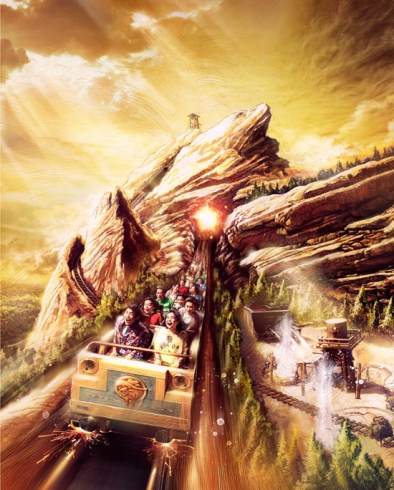 Big Grizzly Mountain Coaster will borrow elements from the enduringly popular Big Thunder Mountain Railroad rides at other Disney parks, as well as from the more recent Expedition Everest at Disney's Animal Kingdom. The ride promises to be more intense and thrilling than any of Disney's other mine train coasters, although it will still be aimed at a family market.

It is believed that the ride will start with a backwards plunge down a steep hill, with the train then racing around a series of turns in reverse. While this section is clearly inspired by Expedition Everest, what follows is entirely original. An “explosion” will blast the train forward, sending it up the mountain at breakneck speed. On the way, riders will experience close encounters with a number of grizzly bears, who could play a more active role than the sedate goats seen on other versions of the Big Thunder Mountain concept.

Grizzly Gulch is the second of three new lands that form part of an ambitious expansion plan at Hong Kong Disneyland. The first, Toy Story Playland, opened in November 2011. The third land, Mystic Point, is due to open in 2013 and will feature a new dark ride known as Mystic Manor.