Walt Disney World has released the latest in a series of images previewing the Magic Kingdom's expanded Fantasyland, this time showing off the Belle's Village area.

The image, embedded below, shows a view across the area towards the recreation of the Beast's Castle as seen in Beauty and the Beast. The castle itself will host the Be Our Guest restaurant, while Belle's Village (named after the film's heroine) will host the Gaston's Tavern counter service dining location, a retail outlet called Bonjour! Village Gifts and the Enchanted Tales with Belle meet-and-greet attraction. 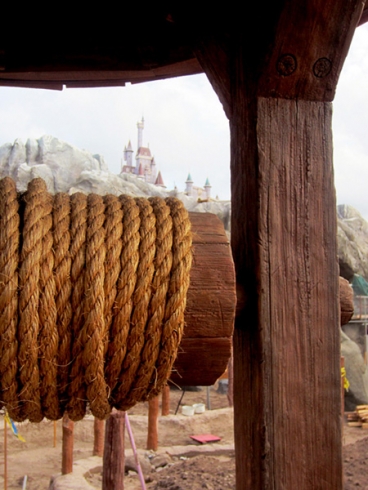 Beast's Castle will be the second large-scale castle to open at the Magic Kingdom, after Cinderella Castle. A third, Prince Eric's Castle, will also open later in 2012 as part of the Fantasyland expansion.

Several new attractions, restaurants and retail outlets are due to open as part of the new Fantasyland, with the headline additions being the Under the Sea: Journey of the Little Mermaid dark ride and the Seven Dwarfs Mine Train rollercoaster.