Buena Vista Street will be dominated by a recreation of the Carthay Circle Theatre, which hosted the premiere of Walt Disney's Snow White and the Seven Dwarfs in 1937. Disney has released numerous pieces of concept artwork showing off the theatre, but fans can now see it for real as it prepares to open to the public on June 15, 2012. 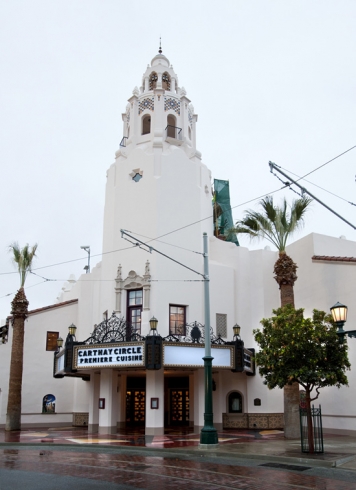 Sitting in front of the theatre in the Carthay Circle area will be a fountain, which is also now visible to guests at Disney California Adventure. In the video below, Disney Imagineers Lisa Girolami discusses the inspiration for the design of the fountain:

The Carthay Circle Theatre will host a new restaurant, which is currently taking reservations. The dining location will serve contemporary Southern California dishes, and will be designed to recreate the post-screening atmosphere following the Snow White premiere.

The former Sunshine Plaza entrance area to Disney California Adventure has been fully replaced by Buena Vista Street, which is designed to evoke 1920s and 1930s Los Angeles as Walt Disney would have found the city when he first started his animation studio.