SeaWorld San Diego has released a new image showing off the "multimedia launch station" that will form a major part of its new Manta roller coaster.

With Manta due to open on May 26, 2012, the park has been slowly drip-feeding video and images of the ride in action to fans of its Facebook page. The latest photograph shows off the tunnel that riders will be launched through at the start of the coaster's circuit, which is surrounded by a 270-degree projection screen. 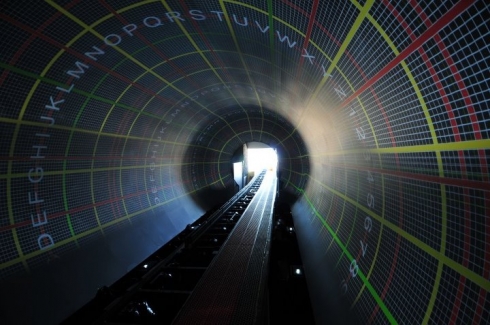 Manta will be designed to recreate the sensation of gliding through the ocean like a real-life manta ray, and projections of the marine creatures will feature in the tunnel. Following the launch, the coaster's trains will traverse a circuit that includes more than a dozen twists and turns, as well as a second launch section.

Unlike the identically-named roller coaster at sister park SeaWorld Orlando, SeaWorld San Diego's Manta will not be a "flying" coaster. Instead, it will be a traditional sit-down steel coaster that hugs the ground closely due to the height restrictions placed on the park by local authorities.

Like the Orlando version, Manta at SeaWorld San Diego will be accompanied by an aquarium, enabling guests to view manta rays and other sea-dwellers up-close.