Disney is to update two major scenes in The Little Mermaid: Ariel's Undersea Adventure, which opened at Disney California Adventure in 2011.

The dark ride is due to be closed for refurbishment from Monday, April 30 through May 4, 2012. When it reopens, lead character Ariel will feature an updated hairstyle in her opening scene, designed to make it appear more realistic. 3D animations of Ariel and Flounder will also be removed, to be replaced by 2D footage that matches the look of the original Little Mermaid movie. 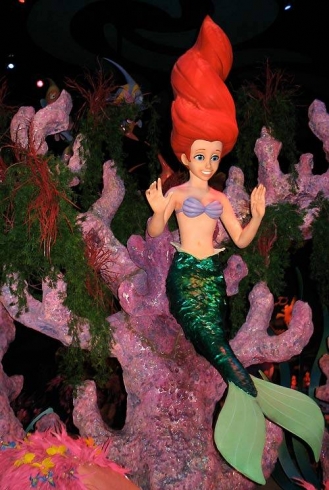 Ariel is set to receive a makeover at Disney California Adventure.

Prior to the opening of The Little Mermaid: Ariel's Undersea Adventure, Disney had publicized the "underwater" look of Ariel's hair. However, the hairstyle seen in the opening scene has come in for some criticism from fans, prompting the redesign.

A near-identical version of the attraction will open by Christmas 2012 at Walt Disney World's Magic Kingdom. Named Under the Sea - Journey of the Little Mermaid, it will form part of the park's expanded Fantasyland. The changes made to the Disney California Adventure ride will be reflected in the Magic Kingdom's version from day one.