The operator of the London Dungeon, Merlin Entertainments Group, has revealed plans to move it to a new site next to the London Eye in January 2013.

Merlin has submitted a planning application to Lambeth Council outlining its proposals for the relocated London Dungeon, which would undergo significant changes as part of the move. The company is aiming to create a cluster of attractions on the County Hall site, including the existing London Eye and the Sea Life London Aquarium.

The London Dungeon has been located close to the London Bridge railway station since its opening in 1974. It features a number of walkthrough scenes that are populated by live actors, as well as three theme park-style rides. The attraction pulls in large crowds, particularly during the peak summer season.

The updated London Dungeon will sit next to the London Aquarium.Image © Merlin Entertainments Group

The current designs for the updated London Dungeon show only two of the rides being recreated on the new site. These would be the Extremis: Drop of Doom drop tower and the Traitor: Boat Ride to Hell water ride. Surprisingly, the Vengeance "5D" laser gun ride, which opened in 2011, is not referred to in the plans.

A number of existing scenes will return in the relocated London Dungeon, including those depicting a plague-infested street, the Great Fire of London, the Torture Chamber, the Courtroom, Sweeney Todd's barber shop, Jack the Ripper's murders and the Labyrinth of the Lost mirror maze. A new scene based around Guy Fawkes' gunpowder plot, similar to an existing scene at the York Dungeon, is also expected to be installed. 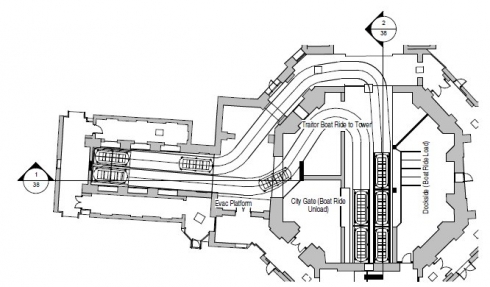 It is not clear from the current plans whether the actual ride system from Traitor: Boat Ride to Hell will be moved, or if an all-new one will be built at the new site. The ride's circuit looks set to be significantly different to that of the existing attraction. 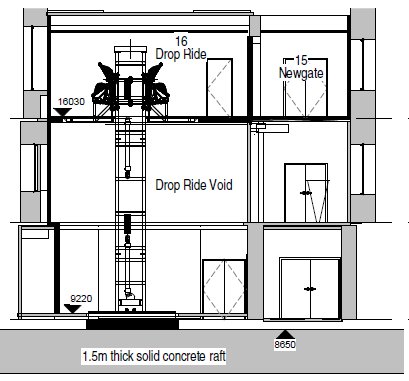 The Extremis drop tower also looks set to undergo major changes, with guests being loaded from the top rather than the bottom. The ride is likely to retain its "public hanging" theme.

The new entrance to the London Dungeon will be located adjacent to that of the Sea Life London Aquarium. A lobby area will be included, helping to alleviate the on-street queues that often snake around the London Bridge site. Guests will descend into the basement dungeons in groups of forty-five approximately every six-and-a-half minutes.

A similar attraction, The London Death Trap, is located very close to the proposed County Hall site of The London Dungeon. While aimed at an older audience, it is likely to face significant competition from Merlin's well-known attraction.

The Big Debate: Does the UK need an indoor theme park?