Walt Disney World has released concept art showing off the planned appearance of the new Tutto Gusto wine bar at Epcot, which will open in May 2012.

Tutto Gusto will be located next to the existing Tutto Italia Ristorante, which is hosted in the Italy Pavilion in Epcot's World Showcase. It will replace the restaurant's lobby area, and will be relatively small - featuring just 96 seats. Vaulted ceilings and stone walls and floors will be used to create an atmosphere reminiscent of a traditional Italian wine cellar. 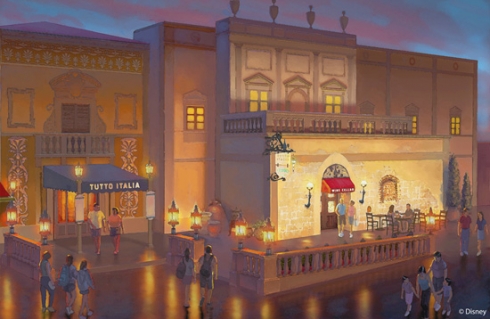 Alongside the food, Tutto Gusto will serve more than 200 Italian wines, along with local beers such as La Rossa, Moretti and Menabrea. Hot and cold soft drinks will also be available.

The new addition will further expand the extensive line-up of restaurants in Epcot's World Showcase, which hosts pavilions dedicated to different countries all over the world. It will be included in Walt Disney World's Dining Plan, which enables guests to pay a flat daily rate to eat at a variety of locations around the resort.