Universal's Cinematic Spectacular show to debut at Universal Studios Florida on May 8, 2012

Universal's Cinematic Spectacular: 100 Years of Movies Memories will be hosted in the park's lagoon, and will be performed nightly during the summer season. An array of fountains has been installed under the water, and will be used to create giant water screens. Memorable moments from almost 200 films will be projected onto these, with light, sound and special effects being used to add to the spectacle. 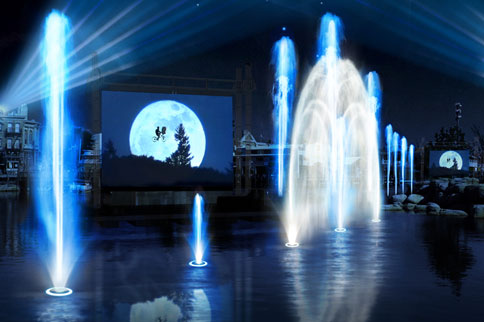 The show has already drawn comparisons with the World of Color show at Disney California Adventure, although concept art appears to show that Universal's Cinematic Spectacular will be on a smaller scale.

The Universal Superstar Parade will feature a range of popular cartoon characters, along with large floats, "state-of-the-art" technology and hundreds of street performers. The characters involved will include the minions from Despicable Me, Hop's E.B. and Nickelodeon's Dora & Diego and SpongeBob SquarePants.

Universal claims that the parade will be an interactive experience, with the characters stopping at various points during the route to engage in dance- and sing-alongs with visitors. The characters will also take part in meet-and-greets throughout the day.