SeaWorld Orlando has submitted plans for its new Antarctica: Empire of the Penguin attraction, revealing a number of new details of the "world's coldest theme park ride".

ParkRumors takes a detailed look at the plans for the ride, which is due to open in 2013. It will form part of the overall Antarctica-themed area, which will also house a penguin exhibit, a restaurant and a gift shop. SeaWorld Orlando claims that it will enable guests to experience life at the bottom of the world through the eyes of a penguin.

The plans do not show a track for the ride, suggesting that it could use a similar "trackless" ride system to the Pooh's Hunny Hunt dark ride at Tokyo Disneyland. This would enable SeaWorld Orlando to live up to its promise that the ride would enable a "different experience each time", since the movements of the ride vehicles could be randomized to some extent. However it could simply be that the track has been left out of the current plans. 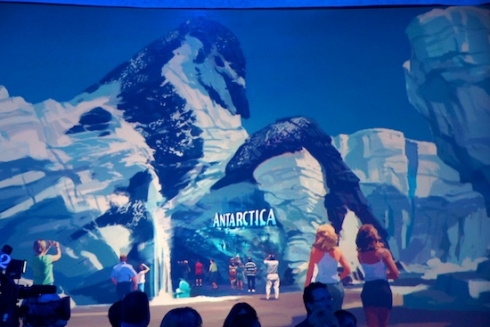 SeaWorld Orlando is billing Antarctica: Empire of the Penguin as its "biggest ever attraction expansion", as it aims to turn around disappointing attendance figures from the past two years. The park will open TurtleTrek, a new turtle exhibit and 3-D movie, to replace its former Manatee Rescue attraction on April 27, 2012.

Further details of SeaWorld Orlando's plans for Antarctica: Empire of the Penguin can be found in the ParkRumors report.