SeaWorld San Diego has installed the final section of track in the circuit of Manta, the new launched roller coaster that will open at the park on May 26, 2012.

The final track piece can be seen in the image below, which was released by the park yesterday. SeaWorld San Diego will now begin work to install giant screens alongside the coaster's opening launch section, which will be designed to give riders the sense that they are gliding underwater. Elements of the aquarium that will sit alongside Manta will also be put in place over the coming weeks. 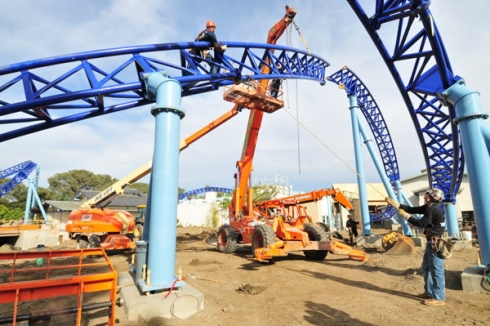 Manta will combine a traditional rollercoaster with elements of a water ride, and will include two launch sections, along with more than a dozen twists and turns. Like those of the identically-named coaster at sister park SeaWorld Orlando, the ride's trains will be designed to resemble manta rays.

However, Whereas the Florida original uses a "flying" coaster system to simulate the gliding action of manta rays, the SeaWorld San Diego version will utilise a launch system in order to keep its height below the strict limits placed on the park by local authorities.