SeaWorld Orlando has confirmed that the opening date of its new 3D attraction, TurtleTrek, will fall on April 27, 2012.

TurtleTrek will replace the former Manatee Rescue attraction, which will become home to two large habitats hosting manatees, freshwater fish and more than a dozen sea turtles. The existing domed theater is currently being refurbished, and will house an edited-down version of Turtle: The Incredible Journey, a documentary which was produced for theaters by SeaWorld Pictures in 2011.

34 projectors will be used to create a 360-degree, 3D experience. The film will run for 7 minutes, and will depict 25 years in life of a turtle. Guests will then be able to view the real thing in the exhibit tanks nearby. 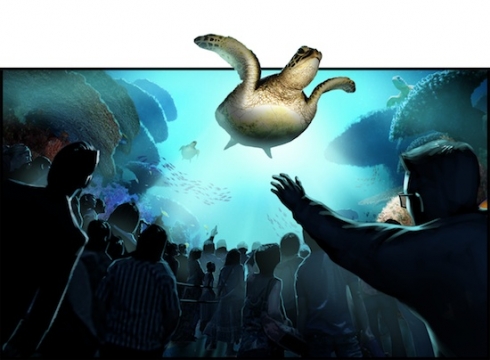 The addition of TurtleTrek is part of a major overhaul of SeaWorld Orlando, designed to draw guests back to the park. The largest new addition will be Antartica: Empire of the Penguin, which will replace the former Penguin Encounter area. The centerpiece of the new land will be a new dark ride, which will enable guests to experience life at the bottom of the world through the eyes of a penguin.