Disney has released new concept artwork depicting the shops that will be housed in Cars Land when the new addition to Disney California Adventure opens in June 2012.

The retail outlets are all themed around locations from Pixar's Cars movies, and will sell merchandise based on the films and Cars Land itself. They will be based along the mock version of Route 66 that runs through the centre of Radiator Springs, the fictional town that Cars Land will recreate. 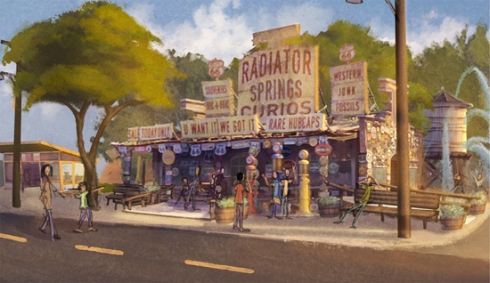 The first store, Radiator Springs Curios, will be themed as a traditional Route 66 tourist stop-off. It will sell small souvenirs that might be found in a bric-a-brac shop, such as antenna toppers, magnets and window clings. 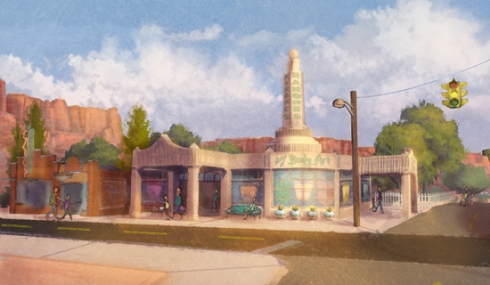 Located on the opposite side of Route 66, Ramone's House of Body Art will sell Cars Land and Radiator Springs merchandise. This will include a new clothing range, the Champion Custom Speed Shop collection. 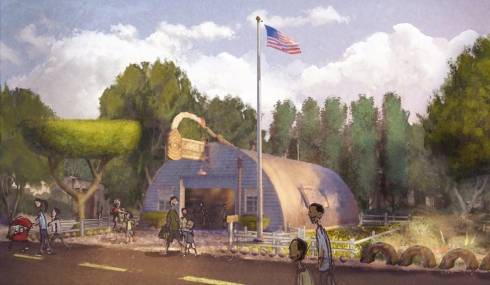 Along the street from Ramone's House of Body Art will be Sarge's Surplus Hut, which will sell an extensive range of items based on the Cars characters. This will include toys, costumes and children's clothing.

Anchored by $200 million E-Ticket attraction Radiator Springs Racers, Cars Land marks the final phase of a $1.1 billion series of upgrades to Disney California Adventure. In addition to extensive remodelling of many areas of the park, two other major attractions are also part of the plans - the World of Color night-time spectacular (which opened in June 2010) and recently-opened dark ride The Little Mermaid: Ariel's Undersea Adventure.