The Big Debate: The Wizarding World of Harry Potter vs. the Warner Bros. Studio Tour

In this week's poll, we ask which you'd prefer to visit: The Wizarding World of Harry Potter, or London's Warner Bros. Studio Tour?

I have my tickets booked already for the opening week of the much-hyped Warner Bros. Studio Tour, which will take guests behind-the-scenes in the actual studios where scenes from the Harry Potter movies were shot. There is a definite buzz from all Potter fans in preparation for the March 31, 2012 opening date, with London finally set to get its own answer (of sorts) to Universal Orlando's Wizarding World of Harry Potter.

Of course, the Warner Bros. Movie Studio Tour will offer a very different experience to the Wizarding World, focusing on the art of film-making rather than being an actual recreation of Harry Potter's universe. This leads us to the intriguing topic for this week's Big Debate: which of the two attractions would you rather visit?

The Wizarding World of Harry Potter 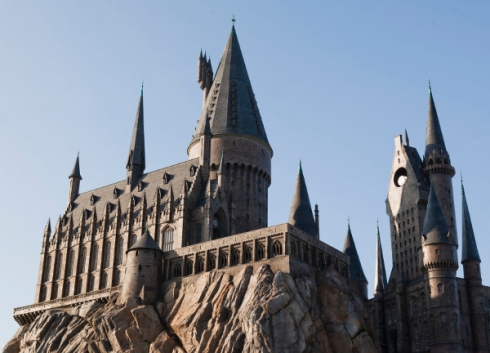 Surely the Wizarding World at Islands of Adventure needs little introduction, having boosted the fortunes of Universal Orlando since its 2010 debut. It allows guests to immerse themselves the world of Harry, Hermione and Ron, exploring the wands in Ollivanders, tasting real Butterbeer and taking a ride on a Hippogriff. And, of course, it features the ground-breaking Harry Potter and the Forbidden Journey dark ride, complete with a stunning recreation of the exterior and interior of Hogwarts Castle.

There won't be any multi-million dollar theme park rides at the Warner Bros. Studio Tour. It isn't exactly being thrown up on the cheap though, with a £100 million renovation budget being spent on the Leavesden Studios, and the Harry Potter exhibit named as its centrepiece.

The undoubted highlight of the tour will be the chance for guests to explore the actual sets that were used in the films. Fans will be transported visually to famous locations such as the Great Hall and the Ministry of Magic through the use of indoor soundstages, while the outdoor sections will include Privet Drive (the road on which the Dursley's live) and the Hogwarts Bridge. Numerous props and clothes will be on display for guests to feast their eyes on, and they will also have the opportunity to transform into their favourite Harry Potter character.

For more information about the tour, read about the 5 spells that the Warner Bros. Studio Tour will cast on Harry Potter fans.

It could be down to price, location or personal preference relating to your favourite type of attraction, but the question is, which Harry Potter attraction would you most like to visit? Let us know what you think by voting below.

Which would you prefer to visit: The Wizarding World of Harry Potter or the Warner Bros. Studio Tour?

Thanks for voting in Theme Park Tourist's Big Debate. Why not let us know why you voted as you did using the comments section below?

Hiya. As a slightly more mature Potter fan (40) I have just come back from Orlando having been on a cheap out of season trip to Universal for eight nights. TBH it coust little more than an out of season week on an all inclusive Benidorm holiday.

I know times are hard, and I am on little more than minimum wage, so am far from rich, but why not. A little Potter escapism (or any other if you like) does wonders for your inner self.

A trip for two to the WB tour is costing me about £75 each for two and that is with an over night stay. How much is a ticket to a football match or cricket or indeed to see something (anything!) at the Olympcs?

Why am I doing both? Because as the author states, they are gonna be VERY different attractions. One is an exceptionally well done recreation, whereas the other is where the movie magic really happened.