Kings Dominion and Carowinds are both making progress on the installation of their new WindSeeker spinning tower rides, which will open in spring 2012.

Both versions of the attraction will stand at some 301-feet-tall, and will see guests spinning around a central column in a vertigo-inducing variation on the classic "Chair-O-Plane" attraction. The rides will feature elaborate LED lighting arrays, which will bring them to life in the evening.

Kings Dominion has released a new video showing off progress on its WindSeeker. Also included is footage of the merchandise that will be sold alongside the park's new upcharge walkthrough attraction for 2012, Dinosaurs Alive!.

Carowinds, meanwhile, has now installed half of the tower pieces that will make up its version of WindSeeker. The ride will become the tallest attraction at the park, and will be located in the Carolina RFD area. 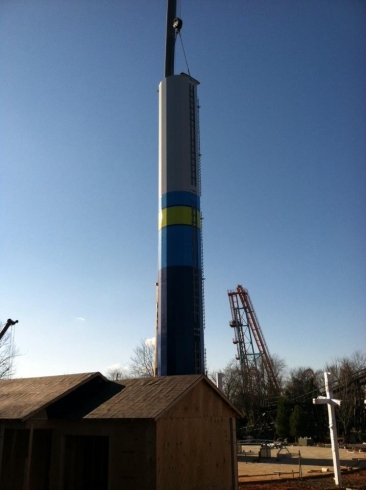 Both WindSeekers will be identical to the identically-named rides at a number of other Cedar Fair parks, all of which opened in 2011. Riders will hit a top speed of 30 miles per hour as they take in panoramic views of the parks and their surroundings.

Theme Park Tourist featured full reviews of the WindSeeker rides at Kings Island and Cedar Point during the 2011 season.

The 5 ESSENTIAL News Updates for Theme Park Fans This Week