Alton Towers has submitted a planning application for its world's-first SW7 roller coaster, which is set to feature a huge number of inversions in its compact circuit.

The plans, submitted to Staffordshire Moorlands District Council, include a number of drawings of the new coaster. The ride's long-rumoured location on the site of the closed Black Hole attraction is confirmed, along with the target opening date of spring 2013.

The new coaster is set to be the most expensive attraction ever installed by Alton Towers, with its rumored £20 million budget topping the £15 million spent on installing Thirteen in 2010. The plans appear to confirm that it will be manufactured by Gerstlauer, who also constructed SAW - The Ride at sister park Thorpe Park.

A full breakdown of the plans for Alton Towers' new roller coaster for 2013 is given below, along with a number of images from the planning documents.

SW7 will be located in the futuristically-themed X-Sector area of Alton Towers, close to the existing Oblivion vertical-drop roller coaster. It will replace the vacant tent-style building that housed the Black Hole coaster prior to its closure in 2005, which has sat empty for a number of years (although it was used to house The Boiler House horror maze at the Scarefest 2011 Halloween events). 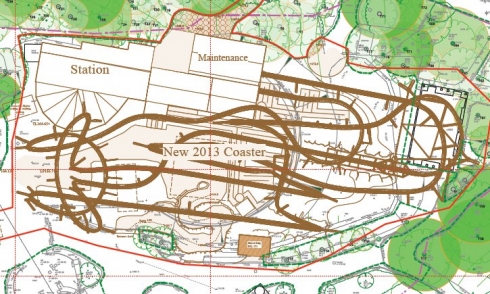 SW7 will be packed into a relatively compact site. Image © Alton Towers

The attraction will cover a total area of around 1.5 acres, a relatively a small area for a major coaster. It will not replace any of the existing rides in X-Sector, with both Submission and Enterprise set to remain in place.

The noise assessment in the planning application (which aims to reassure the authorities that the new ride will not disturb nearby residents) uses Thorpe Park's SAW - The Ride as a reference point. It states the SW7 will be of "the same type and manufacturer", providing near-confirmation that the new coaster will be a Gestlauer Euro-Fighter model. The drawings of the ride also bear a strong resemblance to existing Euro-Fighter coasters. 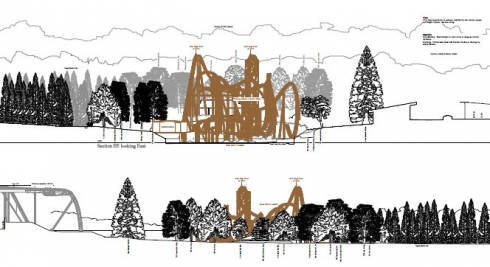 The coaster will be constructed using steel track, and will feature a compact layout that is consistent with other Gerstlauer Euro-Fighter deployments. Several other coaster types, such as Maurer Söhne's X-Car, might also be able to fit into a small footprint, but the statement in the noise assessment would appear to rule these out. 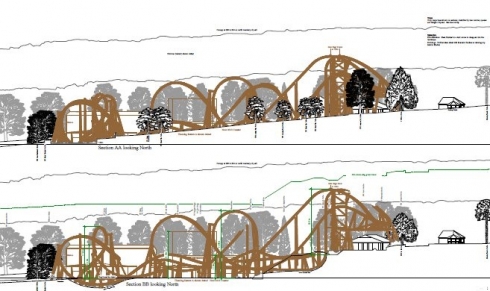 Reaching a maximum height of 22.15 metres (73 feet) above ground level, Alton Towers' new coaster will also dip below ground level at some points in order to gain extra height. It will feature a custom layout that appears to include at least 8 inversions, along with two lift sections (one of which is vertical).

It is not yet clear whether the ride will feature a launched section, although these have been included in existing Euro-Fighter coasters. The inversions appear to include a "cobra" roll and a "sea serpent" roll. 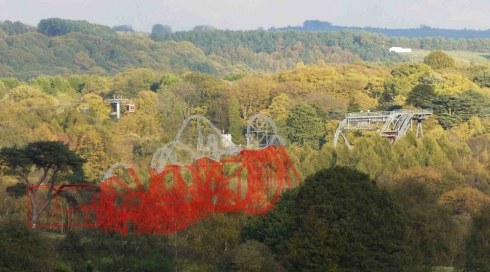 A mocked-up image of SW7 - the red sections will be invisible from this view. Image © Alton Towers

While much of the ride will take place outside, an indoor section housed in its 872 square meter station building could feature additional elements.

Alton Towers has previously claimed that its new coaster will be the "only one of its kind in the world". It is not clear from the plans what elements might contribute to this claimed status, although speculation has begun among fans. 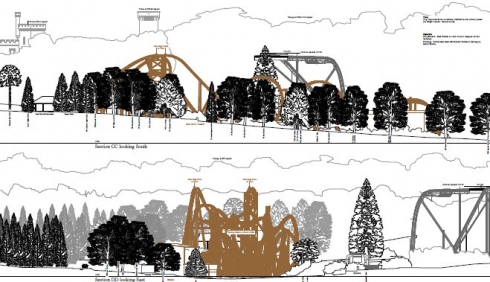 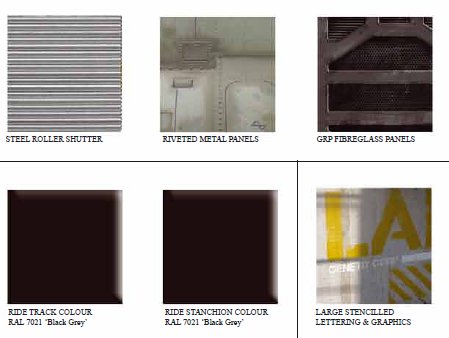 SW7's theme is expected to be consistent with the surrounding X-Sector area, although Alton Towers has promised to submit detailed plans at a later date. The existing proposals do include some details of the styling of the attraction and its surroundings, confirming that the ride will be painted "black-grey" as shown in the image above. An "aged" look will be applied to the ride's station and queue line fencing. 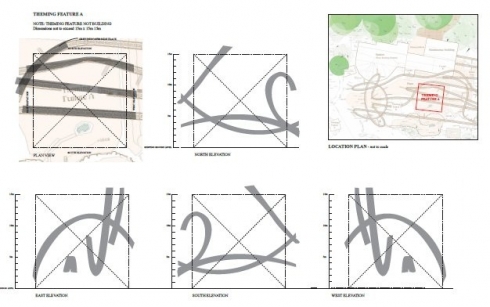 A major theming element will sit at the heart of SW7. Image © Alton Towers

The plans refer to a major theming element sitting at the heart of the ride, although little detail is given beyond the 15x15x15 metre dimensions and the fact that it is "not a building". The coaster itself appears to interact with theming element on at least 3 occasions.

Two other smaller theming elements with be located around the ride's circuit, although again the plans do not describe these in detail. The ride's station will also house some theming elements, with a maximum height of 11.3 metres. A shop and ride photo outlet will complete the experience.

Alton Towers is targeting a March 2013 opening date for its new roller coaster, which is likely to necessitate the start of construction during the second half of 2012. This will commence with the removal of the Black Hole tent and the laying of foundations for the ride's footers. The park is likely to be targeting the first of its 2013 season (expected to be March 23) as an opening date for SW7. 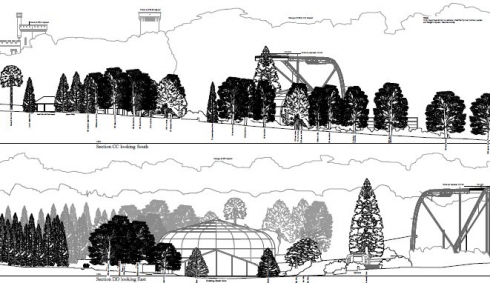 The existing Oblivion roller coaster is likely to provide a good view of the construction site, particularly when its trains pause at the top of its vertical drop - which directly faces the proposed site of the new coaster.

What do you think of the plans?

What's your reaction to the plans for Alton Towers' new coaster for 2013? Let us know by leaving a comment below.

I love Alton Towers and I don't think there is anything wrong with it, it's AWESOME especially OBLIVION!!!!!!!!

hey, back in 2005 there was plans to do a cross valley woodie, plans are around online and such it would be a world class rollercoaster! but due to trees having to be cut down, it was rejected but alton towers will revisit this in the ten year plan :)

If any of you had a clue about what you on about the diagrams clearly.show the lay out of the new.coaster, and you can figure out for yourselfs whats involved

What Alton Towers really needs is a hyper coaster.
Inversions are all well and good, but Alton Towers always has ride footprint issues, meaning they miss the chance to have a truly world class coaster.
Rita - too short, Oblivion - too short.
It's a shame the talked about Intamin wooden coaster through the valley a few years ago never happened.
A B & M hyper coaster similar to Nitro (Six Flags Great Adventure) or Apollo's Chariot (Busch Gardens), Diamondback (Kings Dominion) would be absolutely amazing at Alton Towers, but unfortunately I don't think they will ever build anything on that scale. Check them out on youtube if you're unfamiliar with them.

ALton towers will never get planing permition for a hyper coaster as they are not aloud to go above the tree line. saying that, if you dig a big enough hole...