The CEO of the Disneyland Resort Paris, Philippe Gas, has reportedly stated in a radio interview that no new rides will be added to the resort until autumn 2013 at the earliest.

Disney and More reports that the park will also delay planned updates to Pirates of the Caribbean, Big Thunder Mountain Railroad and Phantom Manor. The long-awaited Ratatouille dark ride for Walt Disney Studios will be pushed back once again, while Disneyland Paris will remain the only Disney park not to have to have updated its existing Star Tours attraction to the newer Star Tours: The Adventures Continue.

Plans for the Ratatouille dark ride are at an advanced stage, with planning permission having been granted by local authorities. However, the heavily indebted Disneyland Resort Paris must gain approval from its creditors before before it can begin construction work on the €150 million project. 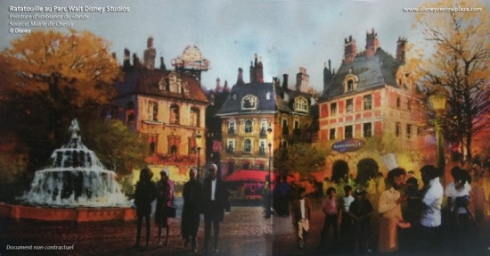 Visitors to Walt Disney Studios will have to wait to experience the Ratatouille ride.Image © Disney. Source: Disney Central Plaza

The resort will make one new addition in celebration of its 20th anniversary in 2012. The report claims that a new show, dubbed Disney Dreams, will be launched in April 2012. Drawing on elements of the existing Fantasmic and World of Color shows at Disney's US parks, it will see animations projected onto water screens in front of Disneyland Park's Sleeping Beauty Castle, along with pyrotechnic and laser effects.

Full details of the Disneyland Resort Paris' plans can be found over at Disney and More.