Universal Studios Singapore has released another image of the queue area for Transformer The Ride, which is due to open at the park in December 2011.

The ride's queue line will be themed around a top-secret facility operated by NEST, the shadowy organsiation that features in the Transformers movies. The latest image shows off the orientation room, in which waiting riders will receive a briefing from General Morshower before heading into "battle". Two human-friendly Autobot Transformers, Optimus Prime, Rachet and Bumblebee will also feature in the pre-show.

The story of Transformers The Ride: The Ultimate 3D Battle will be centered around a battle between the Autobots and the evil Decepticons. As with the films (and the earlier toys and cartoons), the ride will feature a range of robots that "transform" into cars, planes, tanks and other vehicles. The Transformers will be battling over a shard of the AllSpark, a mysterious cube of energy that creates life from mechanical objects. 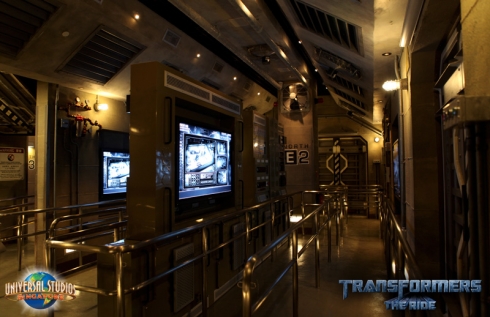 Universal Studios Hollywood is planning its own version of the new ride, which will be known simply as Transformers: The Ride - 3D. The US version is due to open in spring 2012.