Universal Orlando has released an official mobile app to accompany the 2011 Halloween Horror Nights events, which is available for iPhone and Android devices.

The Halloween Horror Nights 21 app can be downloaded for free from the Apple App Store and the Android Market. Similar to Universal Orlando's recently-released official guide application, it is designed help guests navigate their way around the park during the Halloween events.

The application centers around a map of the park, which enables guests to pinpoint their exact location in relation to the haunted houses and scare zones that form part of Halloween Horror Nights. Users can also read details of the attractions, as well as accessing updates on the event's official Facebook and Twitter pages. 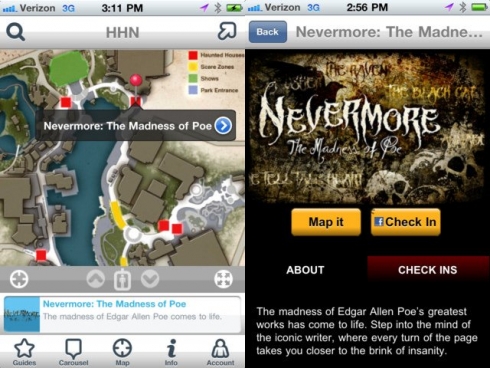 The Halloween Horror Nights app is a tailored version of Universal existing app.

To add interest to the application, Universal is offering a chance to win Universal CityWalk savings guides worth up $50. To be in contention for the prize, users must "check-in" via Facebook or Twitter at each of the haunted houses.