In a surprise announcement, Disney has revealed that it will open a new themed land based on James Cameron's Avatar movie at Walt Disney World's Animal Kingdom.

In a press release, Disney CEO Robert Iger confirmed that the company has partnered with Cameron and Fox Filmed Entertainment to create a real-life version of Avatar's forested planet Pandora at the Walt Disney World park. The announcement also hints at further Avatar lands to open at other Disney parks, with the company having secured the global rights to create theme park attractions based on the movie.

Construction on the Avatar land at Disney's Animal Kingdom is expected to begin in 2013. The full project is expected to take 5 years to design and build, suggesting an opening date in around 2016. Disney claims that the park has been selected as the first location for an Avatar attraction due to its focus on "living in harmony with nature", a strong theme in the movie. Cameron will serve as a consultant on the project, having had previous theme park experience when developing Terminator 2: 3D for Universal.

Disney has refused to be drawn on whether the Avatar land will replace an existing land at Disney's Animal Kingdom, or whether it will be an expansion to the park. It has confirmed that it expects to the area to feature multiple attractions, alongside retail outlets and restaurants. The entire land is expected to be themed around Pandora. 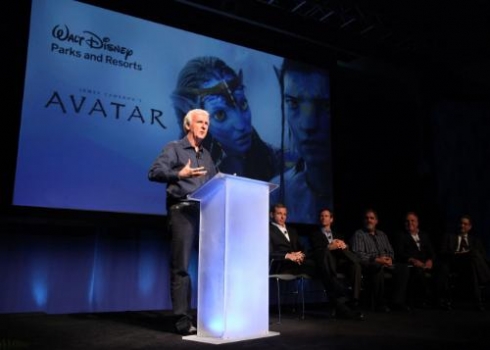 Two Avatar sequels are currently in the works, with Disney expecting to further exploit the franchise in future. The company has said that "looks forward to working with our international theme park partners as our future plans evolve", suggesting that Shanghai Disneyland, Hong Kong Disneyland, the Tokyo Disney Resort and the Disneyland Resort Paris could also be under consideration as future locations for Avatar lands.

Describing the deal, Iger said: "James Cameron is a groundbreaking filmmaker and gifted storyteller who shares our passion for creativity, technological innovation and delivering the best experience possible. With this agreement, we have the extraordinary opportunity to combine James' talent and vision with the imagination and expertise of Disney."

Meanwhile, Cameron himself described his excitement at the prospect of working with Disney: "Avatar created a world which audiences can discover again and again and now, through this incredible partnership with Disney, we'll be able to bring Pandora to life like never before. With two new Avatar films currently in development, we'll have even more locations, characters and stories to explore. I'm chomping at the bit to start work with Disney's legendary Imagineers to bring our Avatar universe to life. Our goal is to go beyond current boundaries of technical innovation and experiential storytelling, and give park goers the chance to see, hear, and touch the world of Avatar with an unprecedented sense of reality."

The move to secure the rights to Avatar theme park attractions has widely been reported as Disney's response to the massive success of the Wizarding World of Harry Potter at Universal Orlando's Islands of Adventure. The first Avatar movie grossed more than $2.7 billion at the box office worldwide, and is based on the story of the indigenous Na’vi people's attempts to fend off mining activities on the idyllic planet of Pandora.