The Sunshine Plaza entrance area at Disney California Adventure has closed permanently, as work begins to transform it into the 1920s-themed Buena Vista Street.

The work is part an ongoing series of updates to Disneyland's sister park, in which Disney is investing some $1.1 billion. The Disney Parks Blog reports that guests will now follow a temporary walkway into California Adventure, with Buena Vista Street due to make its debut in 2012.

Disney has released two new images showing off the designs for the new area, which is designed to evoke 1920s California as Walt Disney would have discovered it when he first moved there. The first image shows the West Side of the street, while the second shows the east side: 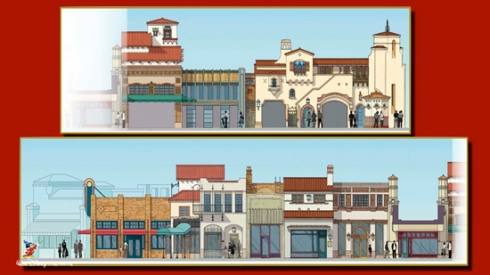 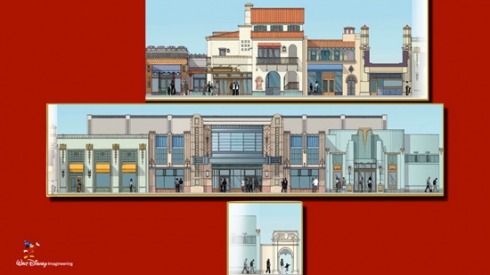 Named after the Burbank street on which the original Walt Disney Studios are located, Buena Vista Street will be designed to resemble 1920s-era Los Angeles. A key feature of the new area will be the replica of the Carthay Circle Theater, which hosted the world premiere of Walt Disney's Snow White and the Seven Dwarfs in 1937.

Disney California Adventure has already opened a new set of turnstiles, which are strikingly similar to those at Disney's Hollywood Studios. Both were inspired by the design of the iconic Pan Pacific Auditorium. Guests will continue to use the turnstiles while Buena Vista Street is constructed.