Walt Disney World has held a "topping out" ceremony for the under-construction Disney's Art of Animation Resort, which is set to open to guests during 2012.

Disney's Art of Animation Resort is scheduled to open in early summer 2012, and will feature rooms themed around some of Disney's most popular animated movies. The 10 wings of rooms will be divided into 4 distinct sections, each themed around a specific movie: The Little Mermaid, The Lion King, Finding Nemo and Cars.

The ceremony marked the placement of the tallest part of the resort's structure, an evergreen tree that will sit on the top of the Lion King wing. 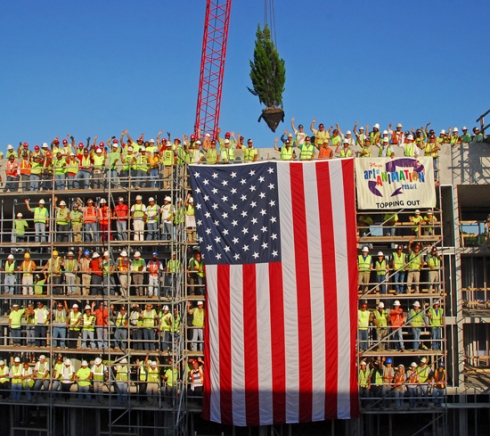 Hundreds of construction workers witnessed the "topping out" ceremony.Image © Disney

Walt Disney World has already begun taking bookings for Disney's Art of Animation Resort, with standard room rates starting at $94 per night. Family suites (which can sleep up to 6 people) are available from $248 per night. Designed to compete with nearby "value" resorts such as the Nickelodeon Suites Resort in Orlando, the resort will re-use unfinished buildings that were originally earmarked for a second phase of construction of Disney's Pop Century Resort.