Disney has released new concept art showing the planned appearance of the replica Glendale-Hyperion Bridge that is currently being installed at Disney California Adventure.

The bridge will be an addition to the entrance area of Disneyland's sister park, replacing the previous replica of San Francisco's Golden Gate Bridge. It is being installed as part of the transformation of the former Sunshine Plaza area, which will become Buena Vista Street. Named after the Burbank street on which the original Walt Disney Studios are located, it will be designed to resemble 1920s Los Angeles. 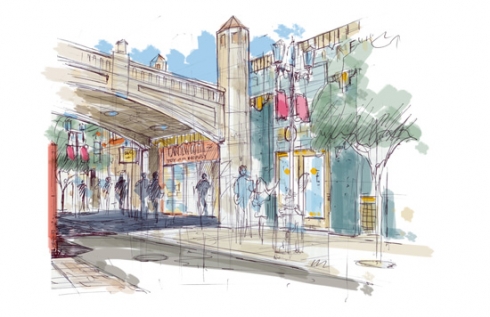 A key feature of the Buena Vista Street will be a replica of the Carthay Circle Theater, which hosted the world premiere of Walt Disney's Snow White and the Seven Dwarfs in 1937. This can be seen in the background of the second piece of concept art below: 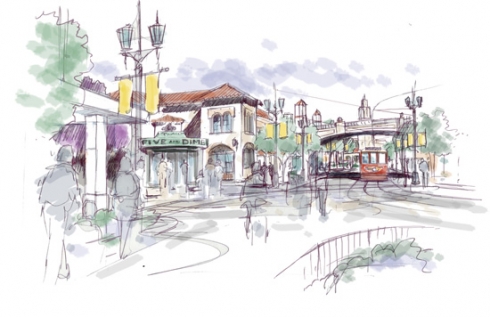 Last week, Disney opened an all-new entrance to California Adventure. Inspired by the design of the iconic Pan Pacific Auditorium, it is strikingly similar to the turnstiles at Disney's Hollywood Studios in Florida. It has replaced the original entrance to Disneyland's sister park, which was dismantled last year.

Disney is carrying out a $1.1 billion series of updates to California Adventure that have already included a major overhaul of the Paradise Pier area and the debuts of the World of Color nighttime spectacular and The Little Mermaid: Ariel's Undersea Adventure dark ride. The renovations are due to be capped by the completion of the 12-acre Cars Land expansion in 2012.

You can find out more about the updates to Disneyland's sister park in our in-depth article, 10 years on: The past, present and future of Disney California Adventure in pictures and video.