Walt Disney World has released new concept artwork for the Fantasyland expansion at the Magic Kingdom, showing the planned appearance of the Be Our Guest restaurant and Barnstormer rollercoaster.

The expansion is due to open in phases starting in late 2012, and will feature a range of all-new and updated attractions. The headline additions will be the Under the Sea: Journey of the Little Mermaid dark ride and the Seven Dwarfs Mine Train rollercoaster, while several new restaurants and retail outlets will also be added to the Fantasyland area. 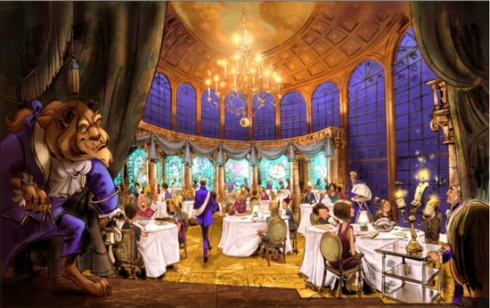 The largest dining location will be the Be Our Guest restaurant, which will be located inside a recreation of the Beast's castle from Disney's animated movie Beauty and the Beast. The 550-seat restaurant will be located in the castle's ballroom, gallery and "West Wing", and will offer fast food dining during the day before switching to a full table service in the evening. 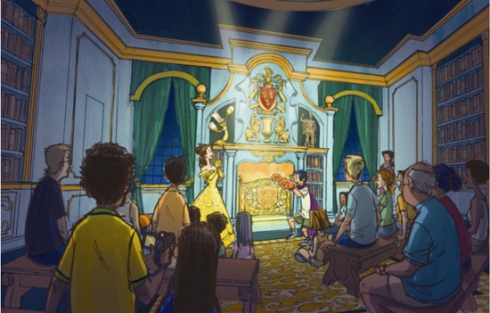 The Beast's castle will overlook an entire area dedicated to Beauty and the Beast. This will also host a restaurant dubbed Gaston's Tavern, a retail outlet called Bonjour! Village Gifts and Belle's father's cottage. In the cottage, guests will be able to interact with the movie's heroine, as the classic story is re-told in The Enchanted Tales with Belle experience. 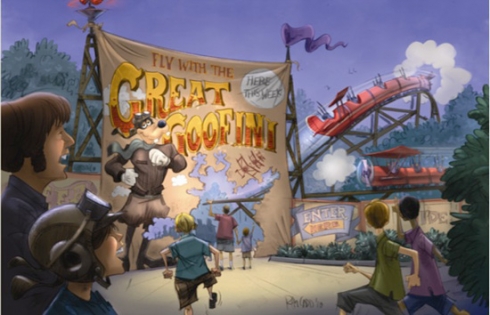 The final piece of newly-released concept art shows the existing Barnstormer rollercoaster, which is set to receive an updated theme. This will be based around Goofy's pilot alter-ego, the Great Goofini.

In January, Disney revealed updated plans for the expansion of Fantasyland. The revised plans focus less on Disney princesses and seem designed to broaden the appeal of the expansion, which had been criticized by some analysts as being too girl-centric. The first new attractions are set to open by late 2012, with majority of the expanded area due to be in full operation by 2013.