Busch Gardens Tampa and Busch Gardens Williamsburg will both use the same theme for their Howl-O-Scream 2011 Halloween events, though different types of ghoul are set to invade the two parks.

In previous years, separate themes have been used for the events at the two Busch Gardens parks. However, this year both will feature the tagline "The Dark Side of the Gardens". Some differences will remain, though, with Busch Gardens Tampa's event set to focus on zombies, while the Williamsburg version will feature werewolves, scarecrows and evil pumpkins.

A poster has been released for the Busch Gardens Tampa events, featuring the slogan: "The dark side of the garden is still this night, but something lurks in the shadows, just out of sight". 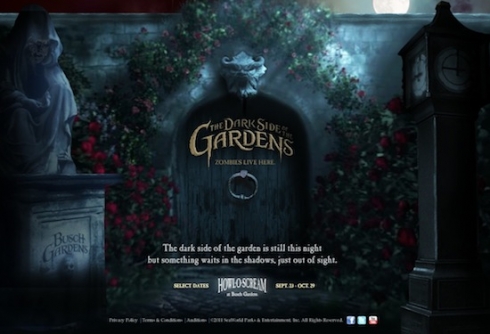 Few other details have been released of the plans for Howl-O-Scream 2011 at either park, although both have launched teaser websites. The Busch Gardens Tampa teaser site and the Busch Gardens Williamsburg version both feature a frightening-looking woman, suggesting that common characters could appear at both parks.

The Howl-O-Scream 2011 events will take place at Busch Gardens Tampa and Busch Gardens Williamsburg on select nights between September 23 and October 29.