Drayton Manor has announced that a new diving show will debut at the park on July 25, 2011, featuring a range of acrobatic stunts.

The show will run for eight weeks, and will see a team of five "daredevil" divers launching themselves from heights of up to 25 metres into a pool just seven metres wide and three metres deep. The shows will take place close to the G-Force rollercoaster, at 12pm, 2pm and 4pm daily. 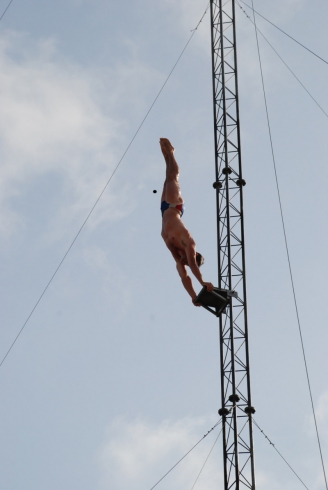 The new dive show will feature a range of daredevil stunts.Image © Drayton Manor

Performances will feature up to 70 different dives, including a range of Olympic and synchronised team dives. In one stunt, a diver will set himself on fire, diving into the pool to cool off the flames which will burn at 800 degrees celsius.

Describing the new show, Drayton Manor's managing director Colin Bryan said: "The park has never had anything like this before, we’re the only park in then UK with this type of show and I have no doubt that these amazing divers will astound visitors with their acrobatics and bravery."