Green Lantern will be the first Intamin ZacSpin coaster to open in the US, and will be an identical clone of the Insane rollercoaster at Sweden's Gröna Lund Tivoli. As the eighteenth rollercoaster at Six Flags Magic Mountain, it will see the park reclaim the "coaster capital of the world" crown from rival Cedar Point.

The new addition will be themed around the DC Comics' strip of the same name, which tells the tale of a group of intergalactic police officers. The Green Lantern comic is the subject of a major motion picture set for release on June 17, 2011 starring Ryan Reynolds and Blake Lively. Six Flags Magic Mountain's coaster is on course to open around late June, providing an opportunity to cross-promote it with the movie. 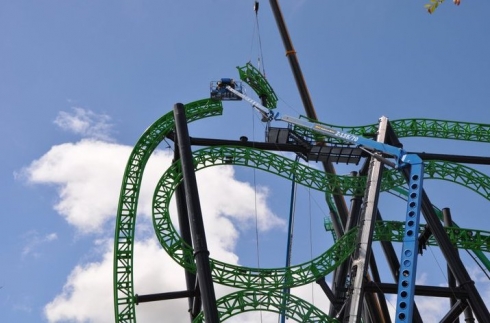 As shown in the image above (posted to the park's Facebook page), the final piece of Green Lantern's track has now been lowered into place, enabling initial testing of the coaster to begin. The ride's trains will be suspended outside of the track, and can rotate independently. Half of the guests will face forwards and half backwards, with their positions changing during the ride. The amount of rotation and swinging of the vehicles will be dependent on the train's load distribution, meaning that the ride experience will never be predictable.

Six Flags Magic Mountain is celebrating its 40th anniversary season in 2011, and is opening three new rollercoaster experiences to celebrate. In addition to Green Lantern, the park has already opened the updated Superman: Escape From Krypton, which was recently reviewed by TPT. The third addition is Road Runner Express, a Vekoma Junior Coaster that has been relocated from the closed Six Flags New Orleans park.