A new set of photos posted to Flickr show that the Madagascar: A Crate Adventure ride at Universal Studios Singapore is finally nearing completion.

The photos, which can be viewed here, show the queue area for the indoor boat ride. The photographer states that "everything is ready", with even the queue music and safety instructions playing in the background. This could indicate that the ride will open in time for the park's grand opening on May 28, which will take place some 14 months after it originally opened to the public.

Madagascar: A Crate Adventure will be an heavily-themed ride featuring the animated characters from the Dreamworks movies. Universal says the ride will feature "animated figures, digital projection, evocative sound, and special effects that create a one-of-a-kind, funny and fun family ride". 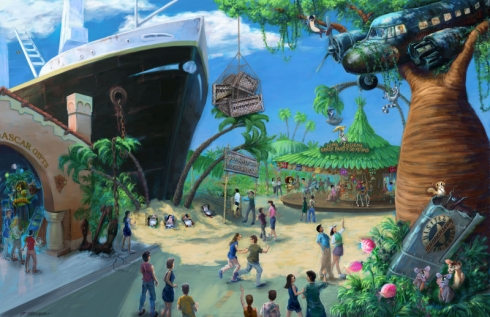 Madagascar: A Crate Adventure was originally due to open with the rest of Universal Studios Singapore in March 2010, but has been plagued by technical problems. Screamscape has reported that this led to the complete replacement of the ride's fleet of boats, as well as the removal of several scenes from its course.