Drayton Manor has opened Ben 10: Ultimate Mission, the first rollercoaster in Europe to be based on the popular Cartoon Network show.

The new coaster made its debut on April 21, 2011, just in time for the Easter weekend. Featuring a "world's first" design and a heavily themed, interactive queue, it is aimed squarely at a family audience. The ride's storyline sees guests joining hero Ben Tennyson as he takes on his arch-enemy Vilgax. A full video of the ride, including its queue and pre-show, is embedded below:

Ben 10 - Ultimate Mission is a variation on Vekoma's classic Boomerang design, dubbed a "Junior Boomerang". It features a 65-feet-tall lift hill, and hits a maximum speed of 34 miles per hour. Riders are pulled up the hill backwards, traversing the circuit once in a forwards direction, before completing a return trip facing backwards.

The plot of Ben 10: Ultimate Mission centres around the Omnitrix, the watch-like device that gives Ben his superpowers. It is told through an indoor queue that snakes around a series of locations from the TV show, helping to set the scene for the ride itself.

The Ben 10 cartoon show depicts the adventures of 10-year-old Ben, who is able to use a mysterious watch to turn himself into a variety of alien superheroes. The show debuted in 2005, being succeeded in April 2008 by a follow-up dubbed Ben 10: Alien Force. The latest series - Ben 10: Ultimate Alien - began airing on Cartoon Network in April 2010.

You can read more about Drayton Manor's new ride in our in-depth review of Ben 10: Ultimate Mission.

For the 2011 season, Drayton Manor is showing Marvin the Martian in the 3rd Dimension in its 4D theatre. Replacing Happy Feet 4D, the 12-minute movie tells the story of the alien's attempts to destroy the earth, and Daffy Duck's efforts to thwart him. 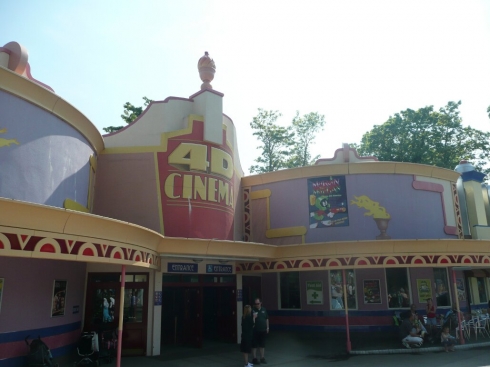 Marvin the Martian is the new resident of Drayton Manor's 4D Cinema.

Marvin the Martian in the 3rd Dimension has replaced Happy Feet 4D in the 152-seat theatre, continuing Drayton Manor's policy of refreshing its 4D attraction every year. In addition to on-screen 3D animation, the movie is synchronised with physical effects such as moving chairs, spraying water and bursts of air. A trailer for the movie is embedded below:

Produced in 1997, Marvin the Martian in the 3rd Dimension was the first computer-generated animated 3D movie produced in the world. It has previously been shown at Warner Bros. Movie World in Australia and at Six Flags Great America in the US.

In addition to adding the Ben 10 coaster, Drayton Manor will also add a new Zamperla Junior Regatta ride to the Thomas Land area of the park. This will replace the Terence the Tractor ride, which will be moved to the Farm area later this year.