Confirmed: Fantasmic to debut on April 28 as Tokyo DisneySea returns to action

The operators of the Tokyo Disney Resort have revealed that Tokyo DisneySea will reopen on April 28, with the new Fantasmic show set to make its debut on the same day.

The Oriental Land Company has issued a press release that confirms that Tokyo DisneySea will reopen following the devastating earthquake that hit north-east Japan in March. The park will operate its regular opening hours of 9am-10pm, with Tokyo Disneyland also set to resume evening operations from Saturday, April 23. The Tokyo DisneySea Hotel MiraCosta will reopen alongside the theme park.

Tokyo DisneySea's 10th anniversary celebrations will be postponed. However, the park will push ahead with plans to open Fantasmic, its version of the laser and pyrotechnic show that has proven a smash hit at Disneyland and Disney's Hollywood Studios. Fantasmic will replace the existing BraviSEAmo show, which closed on November 13, 2010, and has cost around $33 million to develop. 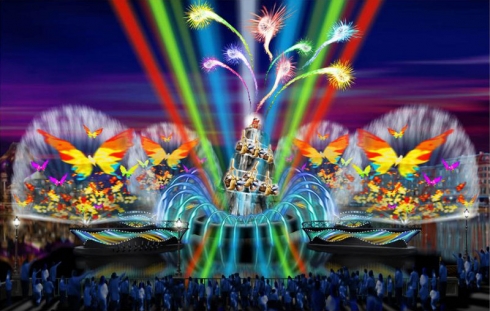 Like the shows in California and Florida (which have been running since 1992 and 1996 respectively), Japan's version of Fantasmic will feature fireworks, water effects and projections of famous Disney animations, with Mickey Mouse acting as conductor. It is also set to feature a "gigantic dragon", suggesting that the fire-breathing animatronic dragon of the Disneyland version will make it across the Pacific for what it claimed to the "biggest and best" version of the show yet.

In addition to Fantasmic, the new character greeting facility Mickey & Friends Greeting Trails will also make its debut at Tokyo DisneySea on April 28. Guests will be able to find Disney characters studying the ruins of an "ancient civilisation" in the new area, which is located close to Indiana Jones Adventure: Temple of the Crystal Skull.

Tokyo Disneyland is currently operating a reduced schedule following its reopening on April 15, closing at 6pm and not running its nightly parade. However, this is set to change from Saturday, with hours being returned to 8am-10pm. The Tokyo Disneyland Electrical Parade Dreamlights will also resume, although it will be closed from May 9 through July 7 in order to receive an number of upgrades.

The Tokyo Disney Resort is currently trying to conserve energy by reducing lighting in both indoor and outdoor areas, while air conditioning, escalators and water fountains are also being used in a restricted way. Some electrical equipment, such as hand dryer units, are switched off altogether due to the impact of power shortages in the surrounding Urayasu City area.

Around 20,000 guests spent the night at Tokyo Disneyland and Tokyo DisneySea on March 11 after the earthquake caused massive disruption to public transport systems. No injuries were reported, with staff providing supplies for those who needed to stay overnight. This included food, water, blankets, heaters and even free merchandise to help entertain and calm frightened children.