Green Lantern rollercoaster to open at Six Flags Great Adventure on May 25, 2011

Six Flags Great Adventure has revealed that it will open the Green Lantern stand-up rollercoaster on May 25, 2011, in time for the Memorial Day weekend.

The coaster has been relocated from the closed Kentucky Kingdom theme park, where it was known as Chang. It stands at 154-feet-tall, reaches a top speed of 63 miles per hour and includes a 121-foot-tall loop, a 103-foot dive loop, a 72-foot inclined loop and a double corkscrew finish.

In its New Jersey home, the Bolliger & Mabillard creation will receive a new theme based around the Green Lantern. The comic, which tells the tale of a group of intergalactic police officers, is the subject of a major motion picture set for release on June 17, 2011 and starring Ryan Reynolds and Blake Lively. An identically-named coaster is due to open at Six Flags Magic Mountain this spring, though it will feature a completely different design. 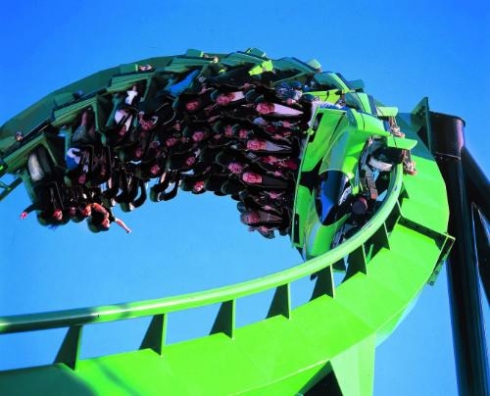 Chang set several world records when it opened in 1997, becoming the tallest, fastest and longest stand-up coaster in the world. Over 4000 feet in length, it will replace the Great American Scream Machine rollercoaster, which closed on July 18, 2010. Green Lantern will be the thirteenth rollercoaster at Six Flags Great Adventure, joining the tallest, fastest coaster in the world - Kingda Ka - in the park's line-up.

Also opening at Six Flags Great Adventure in 2011 will be a new animal nursery, which will feature two 11-week-old European brown bear cubs. The nursery is set to host many of the 100 animals born every year in the park's Wild Safari area until they are old enough to return to the main enclosure.