Video: One Ocean killer whale show to open at SeaWorld Orlando on April 22, 2011

SeaWorld Orlando has confirmed that its all-new killer whale show, One Ocean, will make its debut on April 22, 2011.

The new show has been in development for over a year, and will feature an educational message that is designed to inspire guests to "celebrate, connect and care" for the ocean. SeaWorld Orlando's Shamu stadium is receiving a new backdrop in time for its opening day, while the show will also feature a brand new orchestral soundtrack. The video below details the park's plans for One Ocean:

One Ocean will feature water fountains, and the orcas will continue to splash guests in the audience as in previous SeaWorld shows. Initially, trainers are not expected to enter the water with the killer whales, as has been the case since the death of trainer Dawn Brancheau in February 2010. However, SeaWorld recently announced plans to gradually reintroduce in-water interactions to its shows. 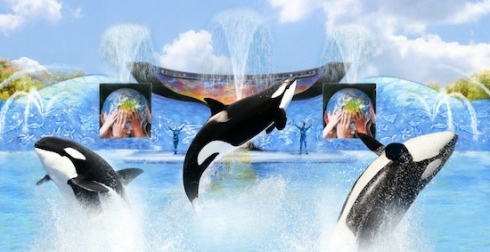 One Ocean is set to focus on killer whales' personalities.Image © SeaWorld Parks & Entertainment

One Ocean will also open at SeaWorld San Diego on Memorial Day weekend (May 28-30), and at SeaWorld San Antonio by June. The new show will replace Believe, which has been running at all three SeaWorld parks since 2006.