Kings Island has confirmed that it will open the "world's largest animatronic dinosaur park" during the 2011 season, naming the new attraction as Dinosaurs Alive!.

The exhibit will be located on 12.5 acres of wooded land close to The Racer rollercoaster, and will feature more than 60 life-sized dinosaur models. Kings Island's 2011 season begins on April 30, with the new attraction set to make its debut on May 26. All guests (including Annual Passholders) will have to pay $5 to enter the new attraction, on top of the park's standard admission fee.

56 of the hand-carved dinosaur models will be animatronic, covered in skin-like materials and featuring realistic movements. The area will be divided into six main scenes and nine thematic exhibits, viewed from a path which will stretch on for 4,000 feet. The scenes will be designed to provide guests with information about the different dinosaur species, such as what they ate, where they lived and how they protected themselves.

Four of the models featured in Dinosaurs Alive! will be controllable by guests via interactive consoles, which will show how scientists believe they moved their arms, tail, mouth and eyes. Also on show will be the world's largest animatronic dinosaur, the Ruyand Yellow River dinosaur, which measures 72 feet long, 12 feet wide and 30 feet high. 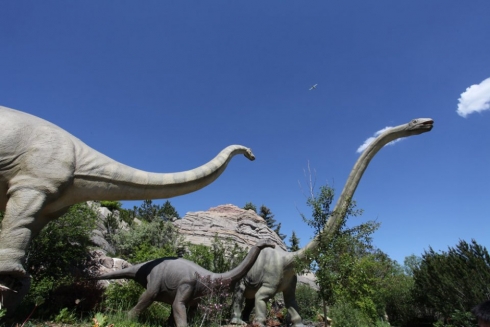 Various well-known species of dinosaur will be included in the Dinosaurs Alive! line-up, including Tyrannosaurus Rex, Triceratops, Stegosaurus, Pteranodon and Spinosaurus. Each has been recreated by Dinosaurs Unearthed, a Canadian company which produces travelling dinosaur exhibits.

Alongside the dinosaurs, Dinosaurs Alive! will feature a replica excavation site, an area where children can "dig for fossils", and a 1,500 square-foot gift shop. Unlike other Dinosaurs Unearthed exhibits, it is set to be a permanent addition to Kings Island's roster of attractions.

Describing the new area, Kings Island vice president and general manager Greg Scheid said: "Dinosaurs Alive! is a long-term investment and reflects our commitment to providing our guests with world-class thrills, fun and family entertainment. The sights, sounds and movements of the life-like dinosaurs will excite and educate guests of all ages."

The addition of Dinosaurs Alive! had been strongly rumored following a series of teaser videos released by Kings Island. Also due to open at the park in 2011 is the Windseeker tower ride, a chair-o-plane style attraction that will enable guests to see up to eighteen miles into the distance on a clear day.