The opening date for the highly-anticipated The Little Mermaid: Ariel's Undersea Adventure attraction at Disney California Adventure has been confirmed as June 3.

The new ride will share its opening date with Star Tours: The Adventures Continue at neighboring Disneyland. The ride will recreate the story of the classic Disney animated movie The Little Mermaid, utilizing some of Disney's most advanced animatronic characters to date.

Ariel's Undersea Adventure will employ an Omnimover ride system similar to that used for Disneyland's Haunted Mansion, enabling guests to continually board and disembark without the ride stopping. The "clamshell" ride vehicles are reminiscent of those used in the Nemo & Friends attraction at Walt Disney World's Epcot, and will rotate to face the different scenes presented during the ride's circuit. 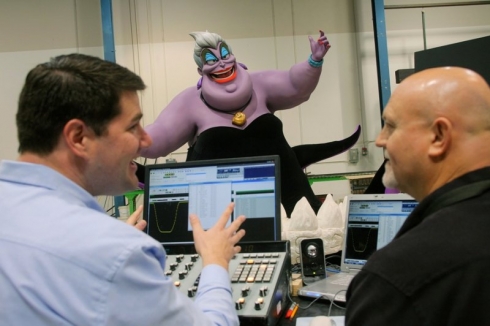 The ride is set to feature appearances from animatronic versions of a number of iconic characters from the movie, including the evil Ursula. Disney has released the first picture of the Ursula animatronic, which can be seen above.

You can find out more about Disney's latest headline attraction in our in-depth preview of The Little Mermaid: Ariel's Undersea Adventure.

A near-identical version of the attraction is due to open as part of an expanded Fantasyland at Walt Disney World's Magic Kingdom in 2012, under the name Under the Sea: Journey of the Little Mermaid.

Disney is investing $1.1 billion into updating Disney's California Adventure, which will see a number of attraction upgrades and additions over the next 2 years. This includes the nighttime spectacular World of Color (which opened last year), plus a whole new land - Cars Land - featuring the $200 million Radiator Springs Racers attraction.