SeaWorld San Diego has moved a step closer to opening a new Manta-themed rollercoaster in 2012, after the California Coastal Commission approved the park's plans.

The decision, confirmed at a meeting on February 11, had been widely expected with Coastal Commission staff having already recommended conditional approval of the plans. SeaWorld San Diego is now expected to start construction work on Manta within a month, with the ride to be situated in the northwest corner of the park. However, the park must first secure building permits from the city of San Diego and submit its final plans to the Coastal Commission.

Manta will combine a traditional rollercoaster with elements of a water ride, and was inspired by the identically-named Manta at SeaWorld Orlando. However, whereas the Florida park's version uses a "flying" coaster system to simulate the gliding action of manta rays, the SeaWorld San Diego version will utilise a launch system and incorporate giant screens showing images of the rays.

SeaWorld San Diego has confirmed that the new ride will be a Mack Launch Coaster, similar in design to the dark ride-coaster hybrid Blue Fire at Germany's Europa Park.

The park describes Manta as its first "pure" rollercoaster, although it says it will also be similar to a water ride. To overcome a stringent height 30-feet limit set by the California Coastal Commission, its tallest drop will be just 54-feet-tall and it will instead use the launch system to generate speed. The park will excavate 24-feet downwards in order to enable the drop to not exceed the height limit. 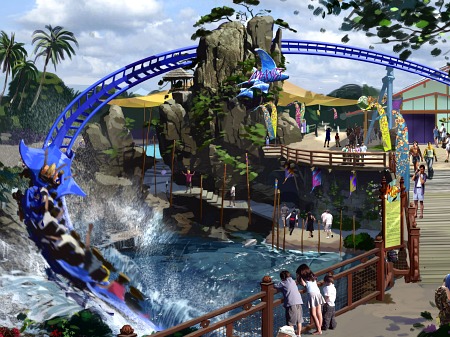 As on SeaWorld Orlando's Manta, the ride's trains will be themed to resemble manta rays. Each will hold 20 people, seated two across. The ride's circuit is believed to include two launch sections, along with more than a dozen twists and turns,

Manta's first launch will be combined with a 270-degree screen which will use a cutting-edge projection system to immerse riders in the underwater world of the rays. Although riders will not actually get wet, the coaster will also pass over a water feature with effects being used to simulate "spraying" water.

SeaWorld San Diego has been at pains to stress that Manta will be part of a broader set of attractions with an educational theme. Alongside the new rollercoaster, a revamped marine exhibit will enable guests to view the creatures that inspired the ride up-close. This will be an overhaul of the existing Forbidden Reef exhibit, and will include more than 65 bat rays, 10 guitar fish and more than 400 other sea-dwellers.

The existing underwater viewing area will be upgraded with brighter lighting and acrylic windows, offering an underwater viewpoint of the bat rays. Themed to appear as though underneath a pier, the area will also incorporate interactive educational elements including touch-screen information booths, video monitors and life-size models of rays.

SeaWorld San Diego had previously planned to open a new rollercoaster in 2010, but the project was subsequently put on hold while the park was sold to new owners. The cancelled attraction was set to be similar in design to the Revenge of the Mummy rollercoasters at Universal Studios Hollywood and Universal Studios Florida.