Thorpe Park has released the plans for its planned new rollercoaster for 2012, which reveal that it will be a B&M Wing Rider model featuring a "crash site" theme.

The details were included in a planning application submitted to Runnymede Borough Council, which confirms several rumours that have surrounded the proposed coaster for months. The coaster, code-named "LC12", is set to cost some £18 million to construct and Thorpe Park hopes that it will debut at the beginning of the 2012 season.

The plans reveal in detail the proposed layout for the coaster and the surrounding theming elements, all of which are covered in-depth below. It also confirms that Thorpe Park still intends to build another major coaster in 2015, as detailed in its Medium Term Development Plan in July 2010. 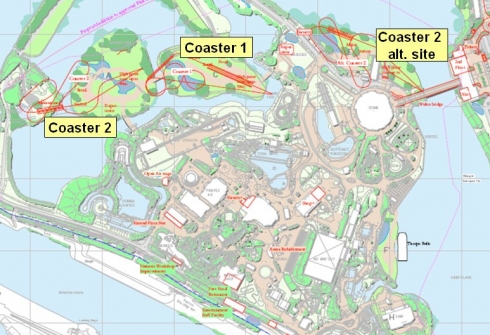 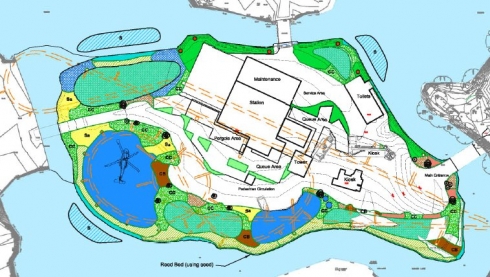 The layout of the island that will host the LC12 coaster.Image © Thorpe Park

The island will be almost completely dominated by the rollercoaster (none of which will extend into the lake), but it will also play host to a range of other amenities including a photo booth, a retail outlet and a food and beverage kiosk. 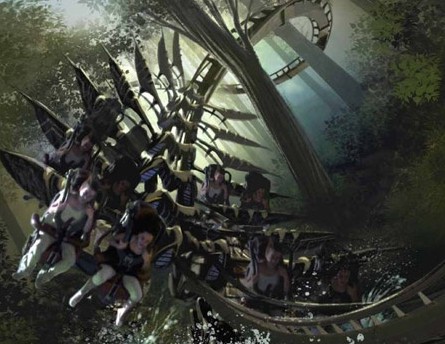 LC12 will feature a similar design to Gardaland's X-Raptor.Image © Gardaland

The plans refer to the new ride as a "Wing Coaster" and reveal that its trains will be four times the width of standard rollercoaster trains. This almost certainly confirms rumours that LC12 will be the second Bolliger & Mabillard Wing Rider coaster to open at a Merlin-owned theme park, following X-Raptor at Gardaland (which is due to open in spring 2011).

Wing Rider coasters see riders seated either side of the track in a "winged" formation. While X-Raptor's seats will remain static throughout the ride, it is rumoured that they will rotate in Thorpe Park's version - making it the UK's first "4th Dimension" coaster. However, the plans do not confirm or deny this.

LC12's layout appears to include at least 4 inversions.Image © Thorpe Park

The plans for Thorpe Park's 2012 coaster include detailed images of its layout, which appear to show that it will feature some unique design elements. This includes a heartline roll just after the 126-feet-tall lift hill, which would see riders starting the first drop in an upside-down position before roaring down into an upright position for the ensuing turns. 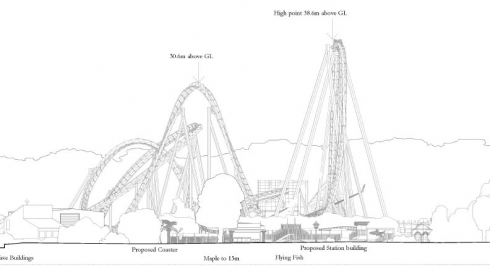 LC12 will pack in a number of tight twists and turns.Image © Thorpe Park

Following the first drop, the coaster will climb a second, 66-feet-tall hill that culminates in another inversion. The train will then enter a series of banked turns which appear to include at least two more inversions. 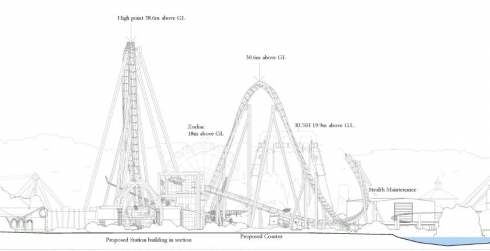 The ride will be contained entirely on the island, and won't extend over the lake.Image © Thorpe Park

The length of the new rollercoaster has yet to be confirmed by Thorpe Park, but it is known from the Medium Term Development Plan that it will not exceed 2,788 feet (850 metres).

Stealth will tower over the new rollercoaster.Image © Thorpe Park

At 126-feet-tall, the new coaster will be towered over by the 205-feet-tall Stealth. However, it will become the second-tallest coaster at Thorpe Park ahead of Nemesis Inferno (95 feet), Saw - The Ride (100 feet) and Colossus (98 feet). The 2015 coaster could be taller, with a maximum height of 164 feet.

"Flying" through a crash scene

Thorpe Park is aiming for a post-apocalyptic theme for its new rollercoaster, as suggested by a previously-released teaser image. The plans claim the ride will offer a "fly-through experience through a crash scene", which will be populated with derelict buildings and vehicles. To match the depressing scene, the coaster's track will be painted grey with grey-brown supports.

The ride's station will be one of its central features, and will be based on a burnt-out chapel or church. The station will cover 437 square metres and reach a maximum height of 12 metres tall, as shown in the images below: 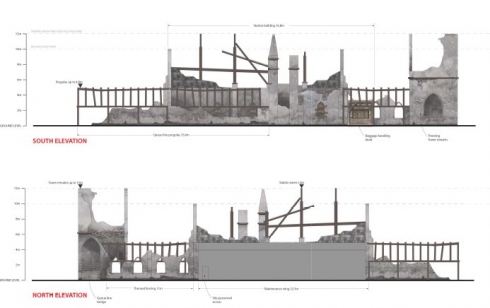 The station is designed to resemble a crumbling church.Image © Thorpe Park 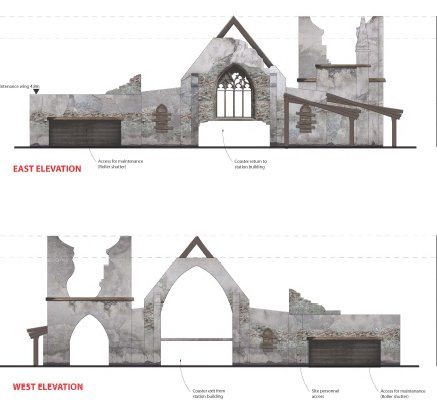 Smashed-out windows will be a feature of the mock church.Image © Thorpe Park

Dotted around the ride's course will be a number of elements designed to add to the disaster theme. These include life-size replicas of a crashed aeroplane close to the first drop, a crashed helicopter jutting out of a pond and a burnt-out fire engine. Some of these elements were originally due to be located in the lake, but Thorpe Park has withdrawn this idea at the request of planning officers. 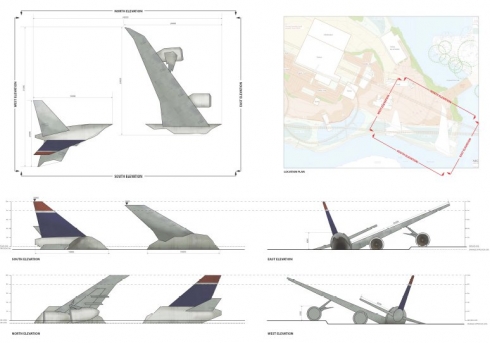 A huge replica of a crashed aeroplane will a major theming feature.Image © Thorpe Park 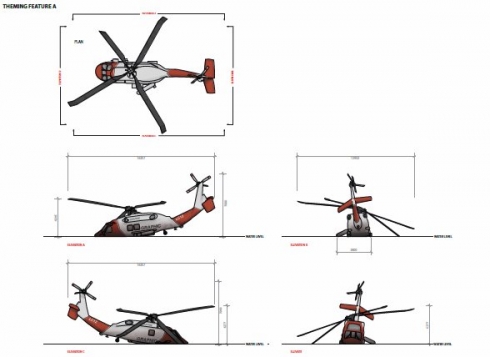 A helicopter will also succumb to the cause of the "devastation".Image © Thorpe Park

Fire engines seemingly proved ineffective in the face of the disaster.Image © Thorpe Park

The ride's queue will also feature similar theming, with a fire-damaged tree marking its entrance and "damaged" fences along its route. 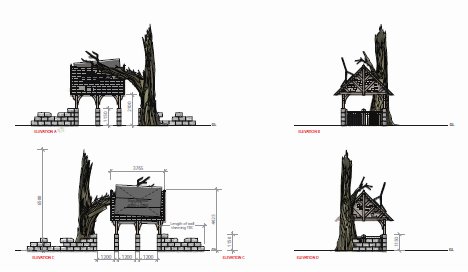 The tree to be featured at the queue line entrance has seen better days.Image © Thorpe Park 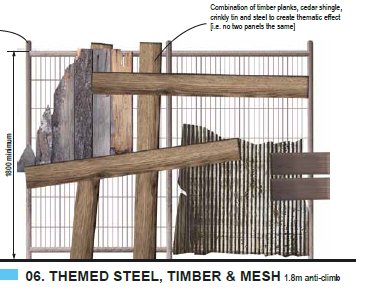 Fences will be themed to appear to be on the verge of collapse.Image © Thorpe Park

Shopping after the apocalypse

The other amenities on the island will also be designed to fit into the disaster theme, with the photo sales unit and food and beverage unit both designed to resemble destroyed vehicles. The retail outlet will be made up of "damaged" containers, while the toilet block will be a semi-collapsed building. 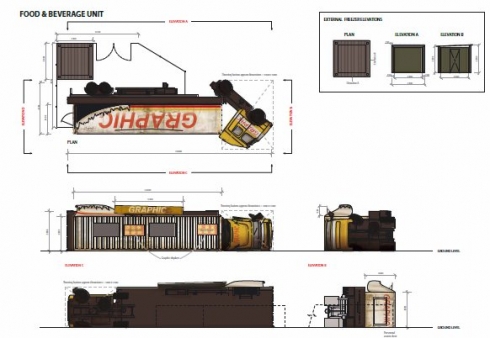 An "overturned" lorry will act as a food and beverage unit.Image © Thorpe Park 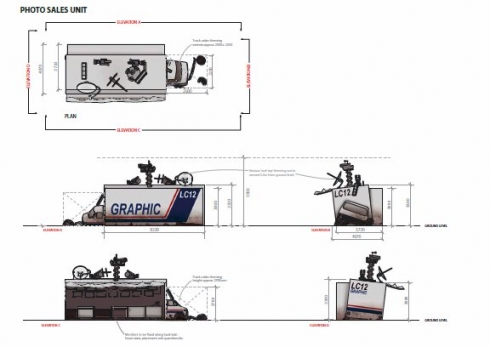 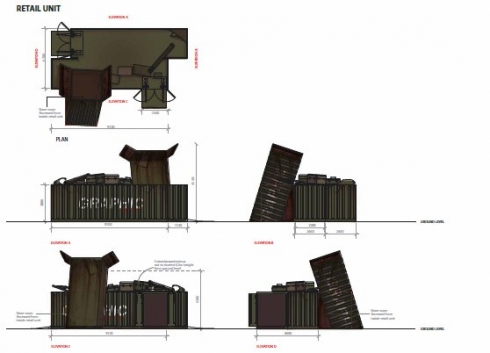 Thorpe Park warns in its planning application to Runnymede Borough Council that it needs a quick decision if it is to open the ride in time for the 2012 season. The council is yet to make a determination on the park's Medium Term Development Plan, although the park hopes that it will do this at the same time as it considers the new application.

B&M's Wing Rider model is claimed to be quieter than the inverted Nemesis Inferno and the coaster will be located within the area that has been approved for development by Thorpe Park. The decision to build a coaster that is set to be less tall than the 2015 coaster appears to be designed to smooth the approval process and enable work to get underway quickly.

We've already included the first B&M Wing Rider, Gardaland's Raptor, in our list of the 10 most exciting new theme park attractions opening in 2011. It should come as no surprise, then, that we're equally excited by Thorpe Park's plans to bring the concept to the UK. The proposed theme for LC12 looks impressive, and goes well beyond anything that Merlin has attempted at its UK parks in recent years. We hope the plans are approved as-is, and the park can get to work building its most exciting new addition in years.

What do you think of Thorpe Park's plans for its 2012 rollercoaster? Let us know through the comments section below.

I'm pretty impressed with how this coaster is going, however, I'm not to keen on 4th Dimension coasters quite yet. Can't wait until it opens :D

I hope that the queue will be as detailed as some of the rides at Universal and Saw The Ride, I think it really adds to the experience of the ride

I also hope it shoots video like Saw did

I don't think this is a 4D rollercoaster. It's a winged one, the seats don't rotate.

I agree with you, Thorpe Park is definitely going at full steam for 2012 =)

What's up, just wanted to mention, I liked this blog post.
It was inspiring. Keep on posting!

So far Thorpe Park is a mixed, theme park. I mean, there are rides for 5 - 8 year olds and rides for people 10+ as Thorpe is gradually adding bigger, faster and scarier rides to it's location, then shouldn't they just scrap the baby rides so that young and old don't clash?
The arrival of the 2 Saw attractions and the future arrival of LC12 and others, has proved that Thorpe is planning to do even scarier and extreme coasters. In no time, Thorpe will become a no toddler/young child site anyway.
Anyway, the new coaster looks awsome - cant wait, 2015 + 2018 are the next dates for the new coasters i think, and Saw Alive experienced a small fire on April 5th 2011 and it is closed untill they find the source of the fire, so they can repair it.
LOVE THORPE PARK!