Walt Disney World has revealed updated plans for the expansion of Fantasyland at the Magic Kingdom, including the addition of an indoor rollercoaster themed around Snow White.

The revised plans focus less on Disney princesses and seem designed to broaden the appeal of the expansion, which had been criticized by some analysts as being too girl-centric. The first new attractions are set to open by late 2012, with majority of the expanded area due to be in full operation by 2013. 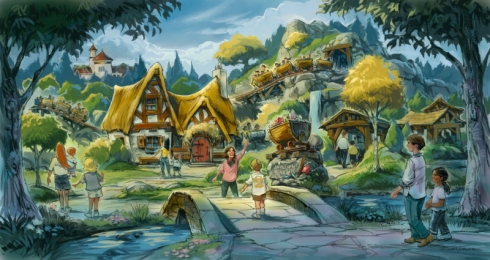 The Seven Dwarfs Mine Train will feature an innovative new ride system.

The biggest new addition to the plans is the long-rumored Snow White coaster, which is to be named The Seven Dwarfs Mine Train. It will take guests on a musical ride deep into a diamond mine, accompanied by tunes from the classic Disney animated movie. The rollercoaster itself will use a first-of-its-kind ride system that allows the vehicles to swing back and forth as they move along the twisting track. 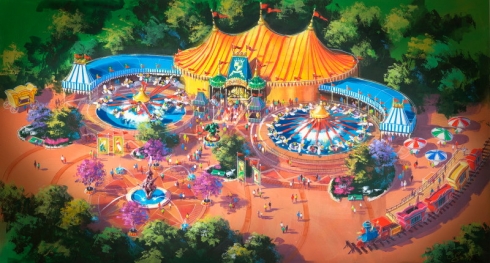 Storybook Circus is designed to ease the boredom of guests queuing for Dumbo.

As previously announced, a new area known as Storybook Circus will replace Mickey's Toontown Fair (which is set to close in February). The existing Dumbo The Flying Elephant attraction will be expanded, to install dual versions of the rotating ride. To ease the wait for the popular but low-capacity attraction, families will be able to experience an array of interactive games inside a giant Big Top.

As expected, the Goofy's Barnstormer rollercoaster will be retained as part of Storybook Circus, but will receive updated theme. Renamed Goofy and the Great Goofini, the ride will give guests an aerial view of the circus below.

Dropped from the originally-announced plans are dedicated areas for Disney princesses including Cinderella and Sleeping Beauty. Instead, a new meet-and-greet area dubbed Princess Fairytale Hall will play host to a number of characters. Making way for the new attraction will be the existing Snow White's Scary Adventures dark ride, the most recent version of which opened in 1994.

Also removed from the designs is the Pixie Hollow area, which was to be based on the fairy world from Peter Pan. Scrapped along with it are plans for a fairy-themed attraction which would have seen riders seated in carts and pulled around a circuit by giant mice. Instead, Disney will build a meet-and-greet area for fairies at Disney's Hollywood Studios. 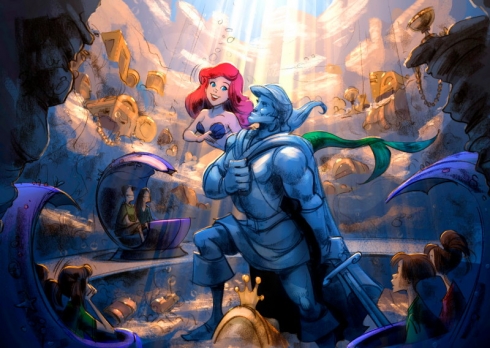 The Little Mermaid attraction will appear at both of Disney's US Resorts.

Construction is already underway on Under the Sea: Journey of the Little Mermaid, which will be identical to The Little Mermaid: Ariel's Undersea Adventure (due to open at Disney California Adventure later this year). The dark ride will be based on Disney's classic OmniMover system, and full details can be found in our in-depth preview.

Another carry-over from the initial plans is an area dedicated to Beauty and the Beast, which will include a small-scale recreation of the village seen in the movie. This will host a restaurant dubbed Gaston's Tavern, a retail outlet called Bonjour! Village Gifts and Belle's cottage. In the cottage, guests will be able to interact with the movie's heroine, as the classic story is re-told.

At the top of a hill overlooking the village will be the Beast's castle, which will host a 550-seat restaurant in its elegant ballroom, gallery and "West Wing". The Be Our Guest dining location will offer fast food during the day, before switching to a full table service in the evening.

The full announcement of the updated Fantasyland expansion plans can be viewed below, courtesy of Inside the Magic: