Superman: Escape from Krypton to reopen on March 19 at Six Flags Magic Mountain

Six Flags Magic Mountain has confirmed that the updated Superman: Escape from Krypton rollercoaster will reopen on March 19, 2011.

The coaster, formerly known as Superman: The Escape, has been out of action since July 2010 to allow several major changes to be made to it. The ride will undergo a similar transformation to the Tower of Terror II coaster at Australia's Dreamworld, with the cars being switched so that riders face in the opposite direction to the current set-up. The track has also been repainted in classic Superman colors, with the top third being painted red and the bottom two-thirds being painted blue.

Superman: Escape from Krypton will see guests blasted using an electromagnetic launch system at speeds of 100mph up to a maximum height of 328 feet, before plummeting back down into the station below. Currently, riders face forwards on the Intamin-built coaster, meaning that they have a view of the sky as they are fired towards it. In the updated ride, they will instead start facing backwards before seeing the ground rapidly recede away from them. It will then rush back towards them as they drop back down into the station, experiencing weightlessness both on the launch and on the fall. 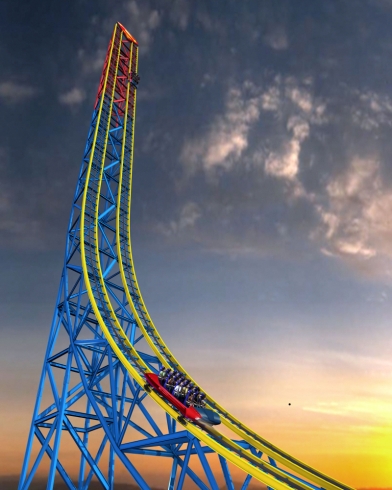 Riders will be blasted up Superman: Escape from Krypton's tower in reverse.Image © Six Flags

The LA Times reports that after several months in operation with both cars running backwards, one will be switched back to running forwards - enabling riders to choose between the two different experiences. Testing of Superman: Escape from Krypton's new trains is expected to be complete by the end of January.

Six Flags Magic Mountain will reclaim the "coaster capital of the world" crown from rival Cedar Point in 2011, which will see it open two new rollercoasters in addition to the updated Superman ride. These will be the Green Lantern (the first Intamin ZacSpin rollercoaster to open in the US) and a yet-to-named family coaster that will be relocated from the defunct Six Flags New Orleans park. Superman: Escape from Krypton and The Green Lantern are previewed in the video.

Cedar Point and Six Flags Magic Mountain have tussled over the title of "most rollercoasters in a park" for many years. The Cedar Fair park plans to add a new attraction in 2011, but it will be a Mondial WindSeeker flat ride rather than a rollercoaster.