Thorpe Park has released a teaser image for its planned new rollercoaster for 2012, while also revealing the project name for the ride as "LC12".

The image, sent to the Thorpe Park Mania fansite, depicts a mushroom cloud with the slogan "The End is Coming" below, suggesting a post-apocalyptic or nuclear war theme for the planned coaster. No further details can be gleaned from the image, which doesn't give any hints as to the type of rollercoaster that Thorpe Park plans to build. 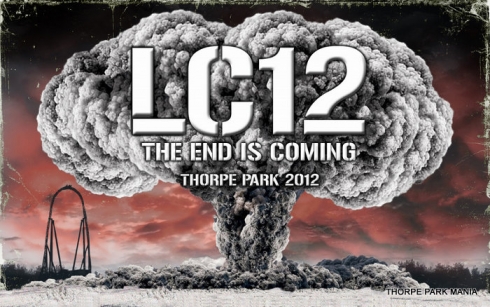 The park plans to back up its claim to be "the UK's thrill capital" with the addition of two new rollercoasters over the next five years. As revealed in Theme Park Tourist's in-depth report on the park's development plans for 2010-16, it hopes to add the new coasters in 2012 and 2015.

The early plans submitted by Thorpe Park to the local council claim that the 2012 coaster will stand a maximum height of 164-feet-tall, will reach a maximum length of 850 metres, and will feature no more than 9 vertical loops. The park plans to situate the coaster close to Stealth, on a currently unused island.

Looks wiked! Can't wait to ride with my mates, think it will be a scary - end-of-the-world theme considering the catchphrase - The End Is Coming, I think my mate will kill herself screaming!

I've read that it has an apocalyptic theme and is supposedly to simulate a plane crash. Apparently a pilots union is upset that they want to theme it that way with Heathrow and Gatwick so close by.
Apparently the local mayor is happy enough with the plans though...can't wait to see more info!

You can see more info on the ride and its theme here:
https://www.themeparktourist.com/news/20110211/3126/depth-thorpe-park-reveals-plans-lc12-bm-winger-rider-rollercoaster-2012

I have heard rumours that it will be a B&M launch coaster similar to The Incredible Hulk. Whether LSM or tire launch I don't know... The explosion theme will be inkeeping with the launch, it all makes sense...

ithink that after thay make the 2012 and 2015 rollercoasters thay shoulld buid a rollercoaster in the same iland
make a lie down rollercoaster shoulld have a 2ooft drop straight down about 100% virtacle and then have a 1ooft loop and go through a tunle whith loade of exploshens and g rolles then have a verticall loop about 90ft and thn mackes a 30ft corcksceew out side thn it gose up 11ft thn makes a stop going in to the sashion.