New concept art has been released for the 2000-room Disney's Art of Animation resort, which is due to open at Walt Disney World in 2012.

Originally announced in May, Disney's Art of Animation Resort will celebrate some of the company's most popular animated movies. The 10 wings of rooms will be divided into 4 distinct sections, each themed around a specific movie: The Little Mermaid, The Lion King, Finding Nemo and Cars. The new "Value" resort will be located adjacent to Disney's Pop Century Resort, with room rates likely to start at around $82/night.

The family-friendly resort is designed to help Walt Disney World fend off heavy competition from the nearby Nickelodeon Suites Resort in Orlando. To help achieve this aim, it will feature 1,120 family suites (holding up to six people) in the The Lion King, Cars and Finding Nemo wings. The Little Mermaid wings will hold 864 smaller hotel rooms, with both suites and rooms being themed to match their respective areas.

Disney's Art of Animation Resort will re-use unfinished buildings that were originally earmarked for a second phase of construction of the Pop Century Resort, which was subsequently abandoned during the 2001 recession. Each of the four themed sections of the 65-acre plot will feature a central courtyard, with these being depicted in the new concept art shown below. 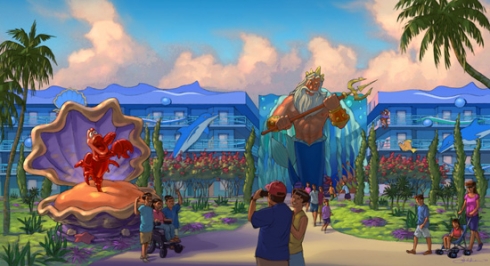 King Triton will tower over the Little Mermaid section of the resort.Image © Disney 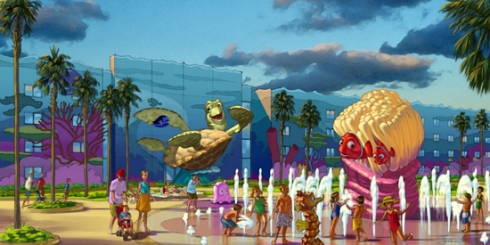 The Finding Nemo section of the resort will include several water features.Image © Disney 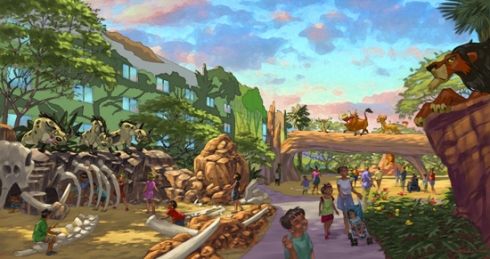 Characters from the Lion King will be seen in another of the resort's themed areas.Image © Disney 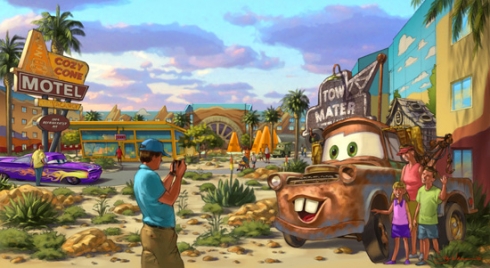 The Cozy Cone motel will feature in the Cars area of the resort.Image © Disney

Disney's decision to press ahead with construction of a new Value resort suggests that it is confident of the economic recovery continuing. However, it also indicates that the firm believes it must cater for travellers with lower budgets, as it has throughout the economic downturn with a series of discounts and offers.

Disney's Art of Animation Resort will open in phases throughout 2012, with land clearing work having started this summer. Disney claims that the project will create 750 permanent jobs, along with 800 temporary construction jobs.