Disney has confirmed that the Mickey's Toontown Fair area at Walt Disney World's Magic Kingdom will close permanently on February 11, 2011.

The area is being replaced as part of a major expansion to the Magic Kingdom's Fantasyland, which is due to be completed in 2013. Both the Mickey Mouse and Minnie Mouse houses from Mickey's Toontown Fair will be relocated, with the rest of the area's buildings and attractions being dismantled or rethemed to become part of Fantasyland (Update: Mickey and Minnie will move to the Town Square Exposition Hall, but the houses will not be relocated).

Mickey and Minnie will be moved to the central Town Square in the Magic Kingdom, in the location currently known as Town Square Exposition Hall. Tinker Bell's meet-and-greet will move to Disney's Hollywood Studios, with her fairy companions moving to Epcot later in the spring. 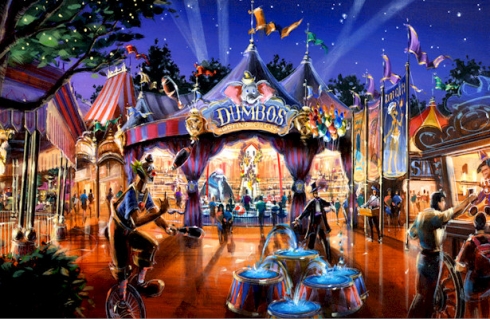 A new version of the existing Dumbo attraction will feature in the updated Fantasyland.Image © Disney

The Goofy's Barnstormer rollercoaster in Mickey's Toontown Fair will be updated as part of the Fantasyland expansion, becoming part of a new circus-themed Dumbo mini-land. This area will also house an updated version of the existing Dumbo: The Flying Elephant attraction, which will two separate, identical versions of the ride to increase capacity.

The expanded Fantasyland will open in two stages, in 2012 and 2013. It will include new areas themed around famous Disney princesses and two new restaurants. The plans will see individual areas constructed based around four princesses - Cinderella, Sleeping Beauty, Belle (from Beauty and the Beast) and Ariel. The areas will be themed around each character - for instance, guests might meet Cinderella in her country chateau, and witness the Fairy Godmother transform her rags into a ball gown.

In addition to the new meet-and-greet areas, a major new attraction based on The Little Mermaid animated movie will form part of the new Fantasyland. An identical attraction will open at Disney California Adventure in 2011, and you can find out more in our in-depth preview of The Little Mermaid: Ariel's Undersea Adventure.