Disney's US parks have launched a partnership with location-based social networking service Gowalla, allowing guests to track their visits to Disneyland and Walt Disney World.

Gowalla allows users to "check-in" at locations in their local vicinity, via applications for leading smartphones or through a mobile website. In exchange, users receive items or stamps for their Gowalla "passports" - with a range of custom Disney stamps being launched as part of the partnership.

Guests at Disneyland and Walt Disney World will be able to view custom Disney Passport pages, which will include maps, a check-in stream, lists of popular places and suggestions for trips. Stamps can be collected by visiting specified locations within the parks. 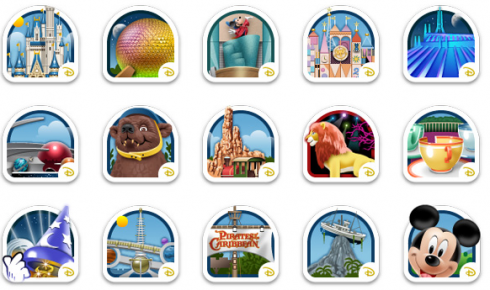 A wide range of Disney-themed Gowalla pins will be available.Image © Disney

Disney has designed the stamps to match the theme of its attractions, with marketing director Walt Disney World Tom Aronson hinting at a tie-in with the classic Haunted Mansion ride, saying: "Beware of the hitchhiking ghost taking residency in your Gowalla Passport."

Special Gowalla "trips" have also been created, which link a number of locations into a coherent journey around a park. For example, Disneyland's "Seasons Greetings" trip takes in "Santa's Reindeer Roundup", the "Believe...in Holiday Magic" fireworks and Sleeping Beauty Winter Castle.

Guests looking to take part can sign up via Gowalla or by downloading the free application for iPhone, iPad, Android, Blackberry or Palm devices.

Gowalla was originally launched in 2007, and had attracted approximately 150,000 active users by March 2010. The company raised $8.4 million in venture capital funding in December 2009.