The prospective new operators of the closed Kentucky Kingdom theme park have launched a new website, providing details of their plans to restore it to its former glory.

The website, run by Ed Hart's Kentucky Kingdom Redevelopment Company, includes YouTube videos that explain how the park could potentially be revived. The Kentucky State Fair Board, which owns the park and it attractions, recently conceded that it will not reopen during 2012 due to delays in securing funding.

Hart, who rescued Kentucky Kingdom from a previous bankruptcy in 1989, plans to spend $50 million on restoring and adding to the park's line-up of attractions. According to a statement on the park's Facebook page, this will include the return of the Twisted Twins dueling wooden rollercoasters, which have been closed since 2008. 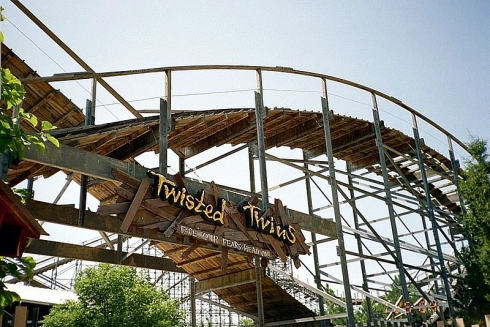 Could the Twisted Twins be set to return in 2012?

Responding to a question regarding the coasters, the prospective operators replied: "At this point, our plan calls to completely renovate it and re-open the dual wooden coasters!”

The reopening of Kentucky Kingdom is dependent on the State Fair Board being able to put in place a $50 million tax-free bond. Around $30 million of this would be spent on new attractions, with the rest being used to restore the park's rides and facilities following its year-long closure. Included in the plans would be a major new rollercoaster, at a cost of between $8 million and $10 million.

Six Flags announced the closure of Kentucky Kingdom in January, following a failure to agree changes to the park's lease. The Fair Board claims that Six Flags proposed that it pay no rent for the 9 remaining years on the lease - instead offering the state a cut of any potential future profits.