A park-wide power cut hit LEGOLAND Windsor on Friday (October 29) forcing the park to close temporarily and leading to the postponement of a highly-anticipated fireworks display.

The power outage struck at 11.40am, and is believed to have been caused by the severing of a cable by an external contractor. LEGOLAND Windsor was forced to evacuate guests from its rides, with Berkshire Fire and Rescue teams helping to disembark riders stranded on Aero Nomad, a balloon-themed Zamperla Ferris Wheel attraction. 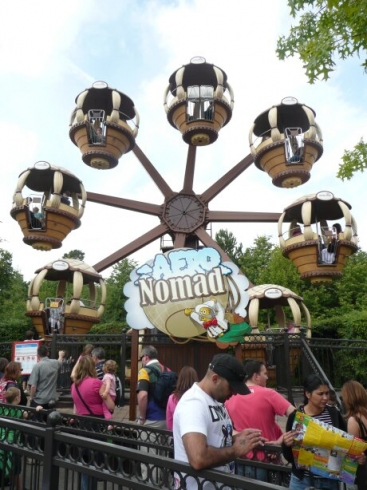 Aero Nomad was among the attractions hit by the park-wide power cut at LEGOLAND.

LEGOLAND Windsor was closed for several hours after the power failure, leading to traffic chaos on nearby roads as guests tried to leave the area. Although the park did reopen later in the day, it opted to postpone the planned evening fireworks display and move it to Sunday, November 7.

Inevitably, the traffic problems and fireworks cancellation led to anger among park guests, with coverage of complaints reaching the BBC News and Guardian websites later in the day. Although LEGOLAND's management has been criticised for failing to offer full refunds on the day, it has offered to exchange tickets dated October 29 for tickets for a future visit that will be valid until July 31, 2011. These tickets can be claimed via a form on the park's website.

Sue Kemp, divisional director of LEGOLAND Windsor, said of the incident: "I can confirm that at 1140 BST the park experienced a power failure which was caused by an external contractor damaging a power cable. Our number one priority is obviously the health and safety of our guests. We evacuated all of our rides and attractions immediately, which was done by our park attraction team who are fully trained in this."

The loss of power is likely to have been caused by contractors working on construction in the Adventure Land area of LEGOLAND Windsor. The park plans to open a new Sea Life attraction in the area, dubbed Project Atlantis, in 2011. It is also working to construct a new hotel nearby in time for the 2012 Olympic Games.