Disney has reached a milestone in the construction of the Cars Land expansion at its California Adventure park, with the land's tallest point being installed in a "topping out" ceremony.

On October 29, construction workers installed a 43-foot-long beam on top of a 125-foot-tall steel structure that will eventually support a mock mountain range. The feature will be part of Ornament Valley, the fictional desert location seen in the first Pixar-produced Cars movie.

The construction of the 280,000-square-foot structure is one of the most ambitious projects ever undertaken by Disney, and will be the largest rockwork project at any of its US parks. To celebrate reaching its highest point, workers signed the beam and planted a US flag on it in a traditional ceremony, captured in the official video below: 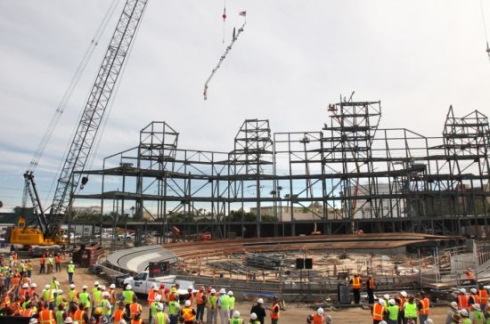 Anchored by $200 million E-Ticket attraction Radiator Springs Racers, the 12-acre Cars Land marks the final phase of a $1.1 billion series of upgrades to Disney California Adventure. In addition to extensive remodelling of many areas of the park, two other major attractions are also part of the plans - the World of Color night-time spectacular (which opened in June 2010) and dark ride The Little Mermaid: Ariel's Undersea Adventure.

Also at Disney California Adventure, World of Color has received an upgrade with the addition of a new scene inspired by the upcoming Tron: Legacy movie. The official debut of the clip was on Sunday night, but several keen visitors captured it on video when it was "soft opened" on Friday - with MouseInfo.com's video embedded below:

Tron: Legacy is due to debut in US theaters on December 17. Disney has already added ElecTRONica, an evening show based on the movie, to California Adventure in anticipation of its release.