Thorpe Park has begun construction work in preparation for the 2011 season, which will see the addition of a new spinning rapids water ride to the park.

The former Octopus Garden children's area in the centre of the park will host the new attraction, with its rides having been removed in September. The spinning rapids ride is set to open in March 2011, and extensive work is now underway to prepare the site for its arrival. 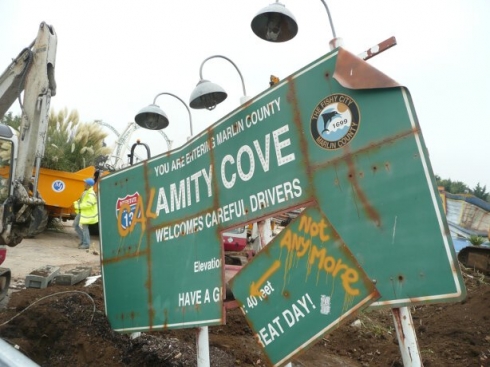 The new attraction was known as Storm Surge in its previous home at the closed Cypress Gardens park in Florida, and a hurricane theme looks likely to be carried over into Thorpe Park. The ride is set to become park of the park's Amity Cove area, with a "post-disaster" theme being hinted at by the sign shown above. 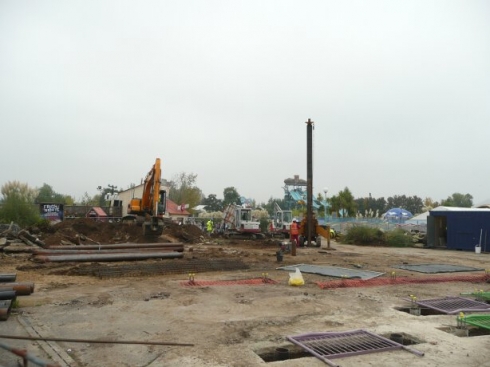 The former Octopus Garden area is the scene of extensive construction work.

The spinning rapids ride will see guests boarding rubber rafts that can hold up to 6 people, before being carried up a conveyor belt to the top of a 19.4 metre-tall hill. They will then be propelled by water down a spiral chute, with the rafts spinning rapidly on the descent before splashing down into a channel at ground level.

With the Fright Nights Halloween events underway at Thorpe Park, the Slammer attraction remains out of action. Repair work is still being carried out on the S&S Sky Swat ride, which has been closed throughout September and October. The cause of the downtime is unknown, although the extended duration could indicate that the ride requires a new part. 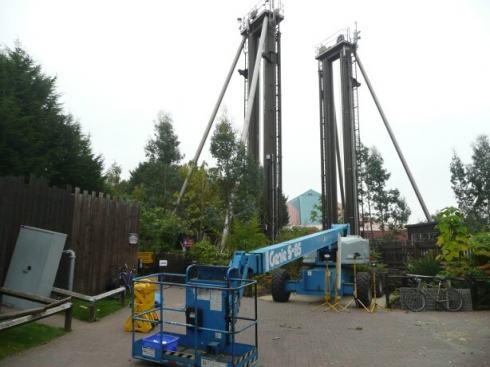 Work to repair Slammer is still ongoing at Thorpe Park.

One of only two Sky Swat rides to have been built (the other being Catapult at Six Flags New England), Slammer has suffered from frequent downtime since its delayed opening in 2005. It sees guests seated at either of a large arm, which is carried to the top of a tower. The arm then spins round in a circular motion, tipping guests up and down and resembling a large "fly swat".

That sign has said CalAmity Cove for a very long time, probably since Tidal Wave opened in 2000. The whole of Amity Cove is set around a fishing village bearing the onset of repeated tidal waves.

The new ride is probably going to be set in Amity Cove, not officially renamed to Calamity Cove.

You're more observant than me...thanks! Story corrected above.

Why are they building via Frights Nights so on...The season ends next month, why couldent they wait till then :/ And whats really happening to X-NO WAY OUT...Cause everyones saying different things??

To be fair, the park has six months to install the new ride, and that includes Christmas and the winter months when the weather could have a big impact. So the answer is probably that they need to start now in order to hit the March opening date.

Not sure about X:\No Way Out currently...it is looking pretty tired these days, but there's no mention of removing or replacing it in the park's medium term development plan.