The Mean Streak wooden rollercoaster at Cedar Point will be closed for the rest of the 2011 season after a small fire damaged a 5-foot section of the ride's track.

Firefighters prevented the blaze on Tuesday (September 21) from causing serious damage, and the coaster is expected to return for the 2011 season. Cedar Point has confirmed that Mean Streak will be closed throughout the HalloWeekends events in September and October, although the park claims that the coaster was due to be closed anyway for annual maintenance work. 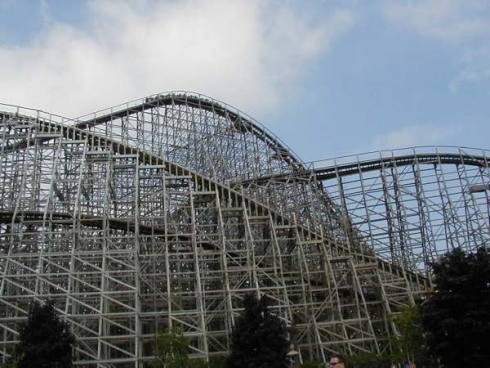 Mean Streak opened in 1991, and at 2 minutes 45 seconds offers the longest ride of any of Cedar Point's seventeen rollercoasters. Constructed from treated Southern Yellow Pine, it features a 161-foot-tall lift hill and reaches speeds of up to 65 miles per hour. The ride receives a new wooden track almost every year and has its own dedicated carpentry staff.