Freestyle Music Park's problems continue to mount, with fraud accusations against its owners being swiftly followed by the imminent repossession of equipment from the bankrupt theme park.

VenCore Solutions has been granted permission by a Horry County judge to immediately reclaim leased property (which includes radios and shelving units), after successfully arguing that it is not insured and in danger of suffering hurricane damage. The ruling could open the floodgates for further creditors to seek to reclaim items from Freestyle Music Park, which already faces foreclosure proceedings from its mortgage holder.

Those proceedings have sparked controversy, with several creditors reportedly challenging the foreclosure lawsuit on the grounds that the mortage holder (FPI US) and the owner of the park (FPI MB Entertainment) are actually the same entity. The companies involved claim that the mortgage situation was engineered to enable the owners to avoid paying creditors in the event of a bankruptcy, with the mortgage holder instead being first in line to receive any funds raised from selling off the park.

For its part, FPI MB Entertainment denies the allegations. The company's attorney, Nate Fata (who has previously represented FPI US), claims: "The answer is obviously no - they're not the same entity." 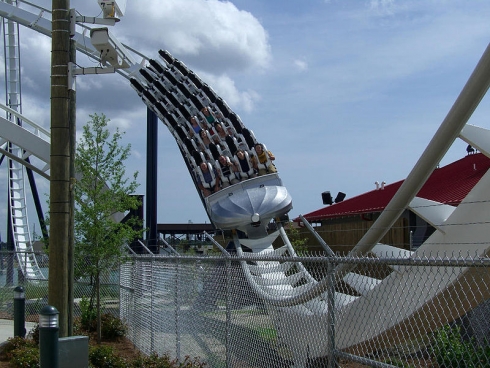 Located in Myrtle Beach, Freestyle Music Park has struggled to stay afloat since opening in April 2008 under the Hard Rock Park name. Visitor numbers fell well short of the owner's 3 million target and the park was forced to file for Chapter 11 bankruptcy protection, closing its gates in September 2008. It was then picked up by FPI MB Entertainment for just $25 million, having cost a reported $400 million to build. It reopened for the 2009 season under the Freestyle Music Park name, but failed to reopen in 2010 after continuing to be plagued by poor attendance figures and financial problems.

In addition to the $30.8 million debts owed to FPI US, the park also faces more than 17 lawsuits due to its failure to meet financial obligations. This includes a suit from automaker BMW, which claims that cars on the Freestyle Music Park's Round About ride look similar to the BMW Mini, and that the park should have signed a licensing deal to use the likeness.

This seems to have become the American way of doing business for many... build on money that never existed. Get personally rich as quickly as possible. Cover all of your bases so you can't be harmed when it falls apart. Cut your losses and let the people who took a chance on you eat the debt.

Its always darkest before the dawn, I would not give up just yet.