Thorpe Park's Octopus Garden operated for the last time on September 5, and has now been closed to make way for the opening of a new water ride in 2011.

Theme Park Tourist was on hand at the park to capture the last few moments of the Octopus Garden, which can see be seen in the images below. All 6 remaining "kiddie" rides in the area will be removed from the park ahead of the 2011 season, to be replaced by a spinning rapids ride. More details of the new ride can be found in our extensive preview. 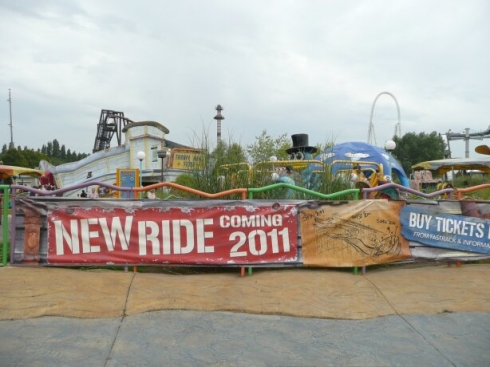 The Octopus Garden has closed to make way for the 2011 water ride. 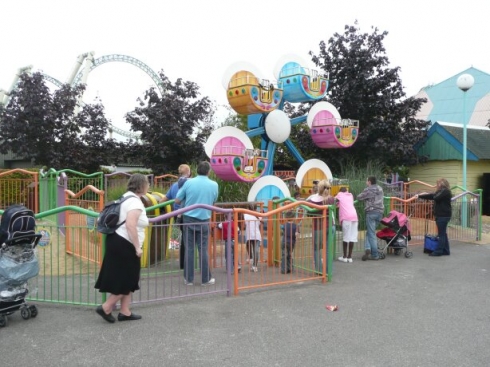 The "kiddie" attractions in the Octopus Garden can still draw a small crowd.

More images of the Octopus Garden's last day can be found in our image gallery.

Given Thorpe Park's positioning as "the nation's thrill capital", and the presence of nearby child-friendly parks Chessington World of Adventures and LEGOLAND Windsor, the closure of the Octopus Garden is not unexpected. However, it has led to concerns from some fans that Thorpe Park's ability to cater for families with children of differing ages will be diminished.

Thorpe Park has also begun in-park advertising for its annual Fright Nights Halloween event, which will take place on October 8-10, 15-17 and 22-31, 2010. This year's event will feature four temporary horror mazes in addition to the permanent SAW Alive maze which operates year-round. 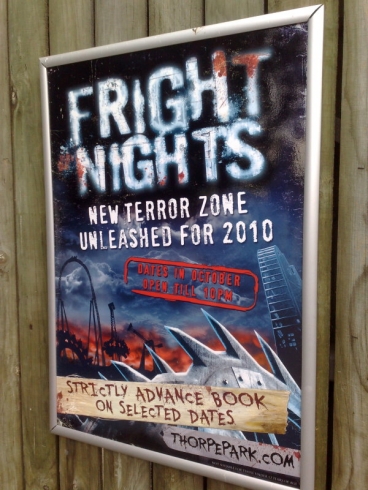 Fright Nights is back at Thorpe Park for Halloween 2010.

The park will be open until late during Fright Nights, allowing guests to ride attractions such as SAW - The Ride in the dark. The four live-action horror mazes have all been seen in previous years, and will be:

The way Merlin are running this park is a disgrace. With the removal of Octopus' Gardens the park now has little to offer the family visitor. I have a 13 year old who loves all the coasters but an 8 year old who is too small for most of them, what is she too do?
Thorpe Park is already a park that is over run with chavs, smoking, spitting and jumping queues but now the park will be more full of them than ever, I certainly would never allow my daughter to go there without me so for 3 or 4 years it's farewell to Thorpe from us.

Unfortunately, I suspect this will be the case for many families. It's something we plan to look at further in a future editorial.

We had to chuckle when we rode the Canada Creek Railway on our last visit...one moment kids are travelling past models of bears, the next they are going past the horror-themed SAW - The Ride. On that evidence, it does seem that Thorpe Park is only making a token effort to cater for families - although perhaps Merlin is happy to keep the teenagers there, and away from Chessington and Legoland.