Six Flags New England has confirmed plans to add a new rollercoaster to the park in 2011, with the ride widely expected to be a relocated wild mouse coaster from the closed Kentucky Kingdom park.

On its website, Six Flags New England describes the new coaster as featuring 17 hairpin turns and 1,213 feet of track. These match the specifications of Road Runner Express, which operated at Six Flags Kentucky Kingdom from 2000 until Six Flags closed the park in January. The ride will be the only one of Kentucky Kingdom's attractions to be retained by Six Flags as part of a deal (pending court approval) which will see ownership of the rest transfer to the Kentucky State Fair Board. 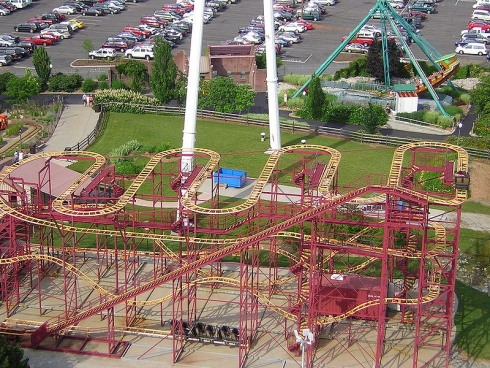 Road Runner Express is a classic steel wild mouse coaster manufactured by German firm Maurer Söhne. It sees riders boarding four-person cars before being carried up a 49-feet-tall lift hill, and reaches a top speed of 28 miles per hour as it careens through a series of sharp turns. Riders must be a minimum of 48 inches tall to ride the attraction.

The ride will become the tenth rollercoaster at Six Flag New England, and the first to be added to the park since spinning coaster Pandemonium in 2005. It will be located in the DC Super Hero Adventures section of the park, and is therefore likely to receive a superhero (or villain) theme to help it fit in at its new home.