The Hanwha Resort in South Korea has opened what manufacturer WhiteWater claims is the world's largest waterslide - the Abyss.

The slide stands at nearly 30 metres tall and sees riders boarding 4 or 6 person rafts. It is based on a familiar "funnel" design, with rafts sliding down an initial chute before "oscillating" around the funnel and reaching near-vertical angles. The Abyss slide at the Korean resort is set to be the first of many installed at Middle Eastern and Asian water parks, according to its manufacturer. 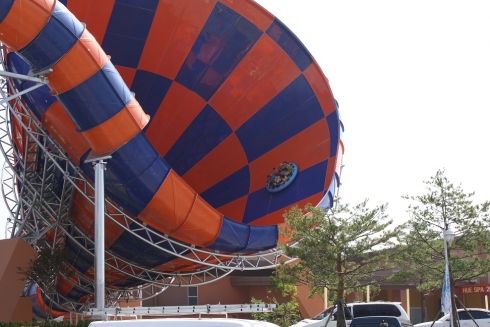 The first installation of an Abyss slide is located on the roof of a partially underground building at the Hanwha Resort, with lightweight materials being used for its construction. Future versions could include "interactive" sound and lighting to add to the experience.

Water park fans in the US and Canada hoping to ride the Abyss will be disappointed, however, with the new slide not being available for sale in North America currently.